People Worth Hugging at the Amsterdam Coffee Festival

Jane Lash visited the Amsterdam Coffee festival, paying a visit to one of her favourite coffee scenes. There, she met up with many coffee pros from the Netherlands and beyond and was happy to finally connect with people from all over the world, in real life.

The Amsterdam Coffee Festival, in its 4th year already, is an event that gathered over 12000 people, 10-12 March. What a great opportunity to come and hug all the coffee people who inspire us through their social media channels every day. That’s exactly what I did! And by letting you know who are those people I hope to create an impression of the Amsterdam Coffee Festival.

People I came to meet and to hug

I started my hugs with Joost Leopold from De Koffieschool. it is an Utrecht-based coffee school offering SCAE-certified training, my alma mater where I started my Coffee Diploma system with a very productive Brewing Foundation. De Koffieschool stand was always crowded, with Mr Leopold brewing Syphons on an infrared heating set. It looked like a magician’s show. I also got a chance to brew with him right on the stand, just the way we did last year! 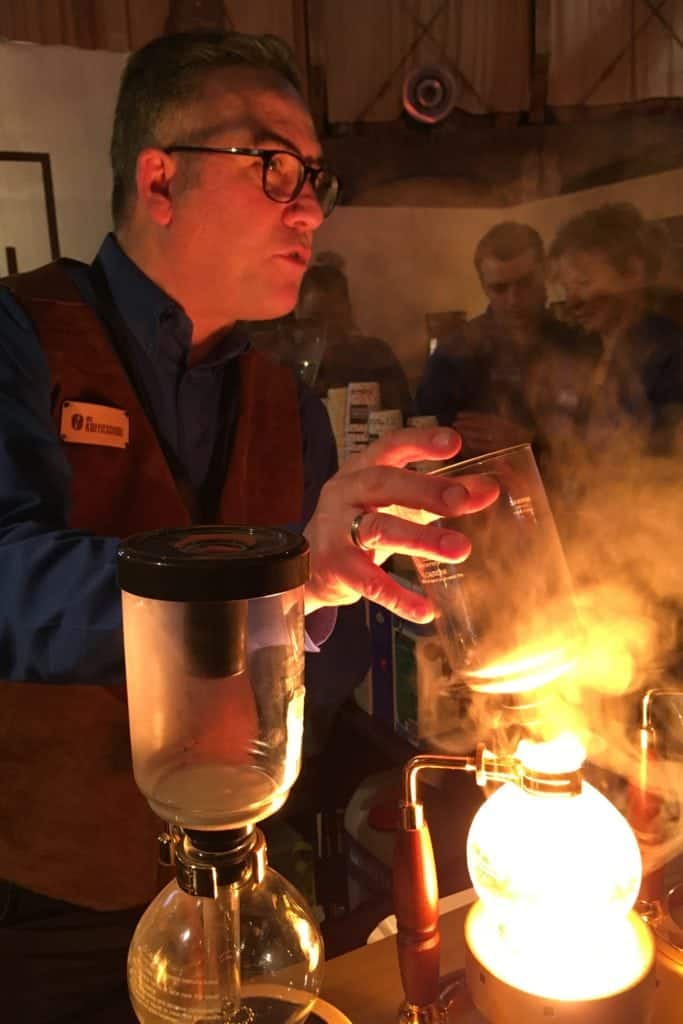 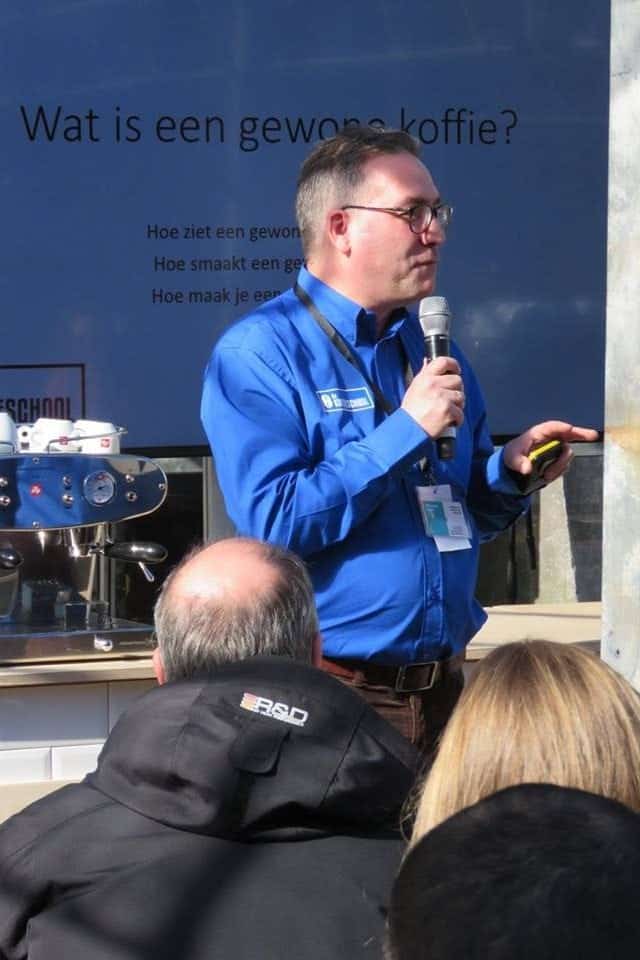 Sad I missed Rob Kerkhoff, Dutch Brewers Cup Champion ’15 and ’16 and co-founder of Keen Coffee, I got the best hand-brewed coffee here and a Phoenix70m, so I did not leave disappointed. That for sure was the most beautifully designed and crowded stand at the expo. Keen coffee really gave an impression to be the biggest and the most popular coffee roasting brand in Netherlands. I would not disagree—they are one of my favourite ones—and they really invested a lot and worked hard. 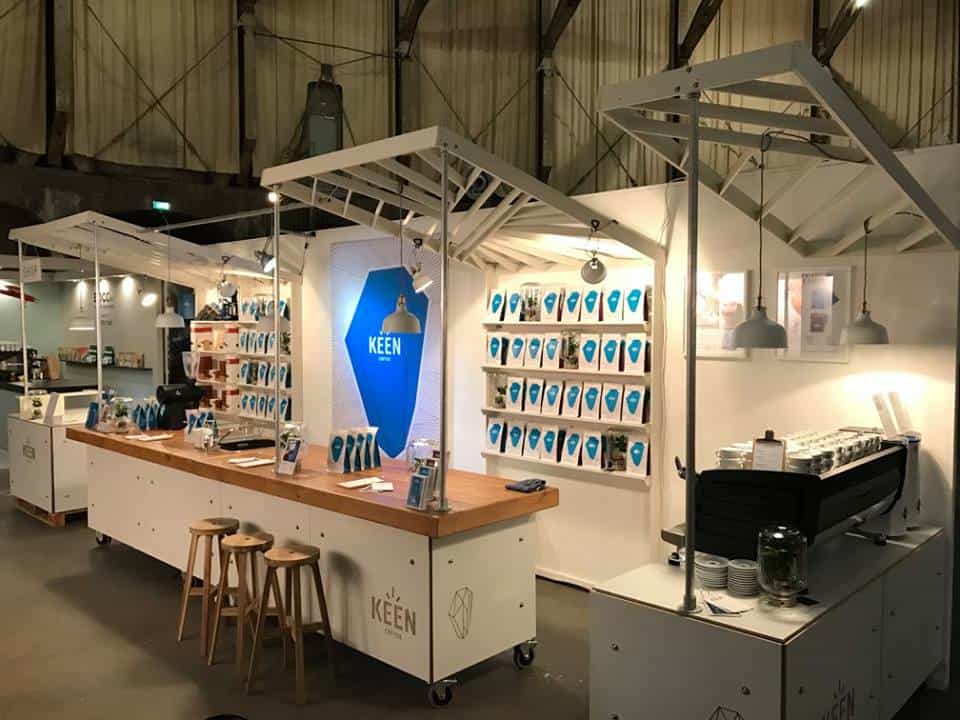 The third was a must-have hug with Alex and Erica, The Coffeevine team. The Coffee Vine is an Amsterdam-based coffee subscription bringing 3 bags of beans from the whole world to my doorstep, monthly. Thanks to them I got to know the best roasters such as Padre from Melbourne, Weekenders from Japan, Koppi and Drop from Sweden or my all-time-favorites Friedhats from the Netherlands. Alex and Erica were brewing the March box at their small stand, introducing a travel 1-cup brewing kit. 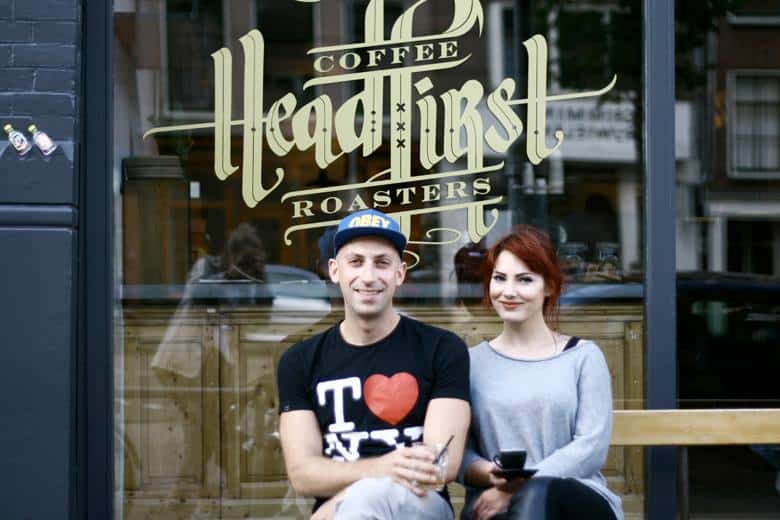 Patrik Rolf Karlsson, the roaster behind April Coffee launched in Copenhagen a few months ago, was one of the judges at the Coffee Mixologist competition and also had a stand where I could finally try his roast—and have my hug. Patrik is regularly speaking at coffee events. He inspired me a lot at last year’s Roasters Camp, changing my vision and approach to cuppings. Check out his vlogs for more coffee inspiration. 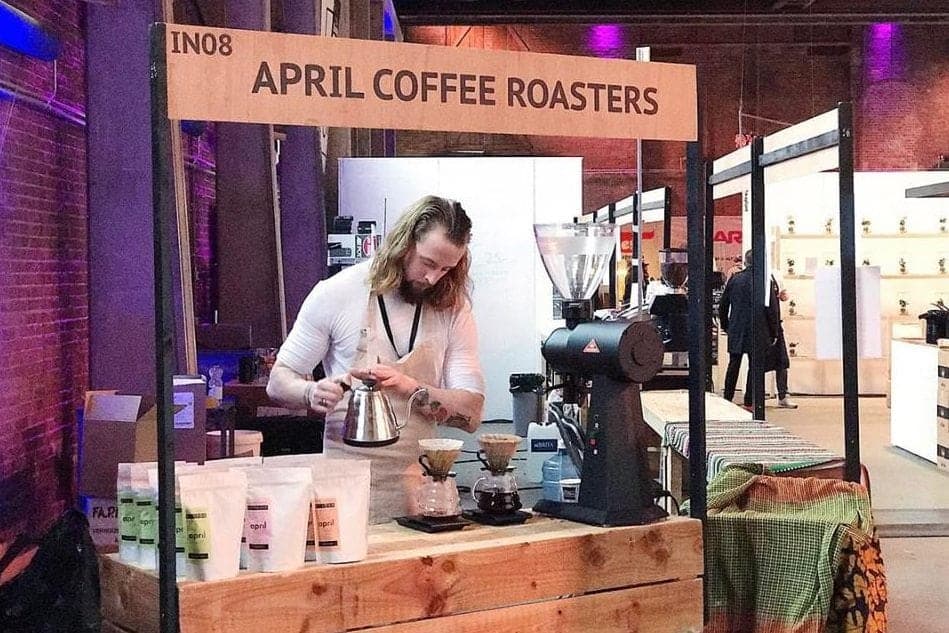 THE woman of Saint-Petersburg speciality coffee community and Mad Espresso Team judged the Russian Brewers Cup just a week before visiting Amsterdam—I believe to get inspiration and also to compare this Dutch industry coffee event and community to the Russian one. I ran into Iryna and hugged her many times that weekend! 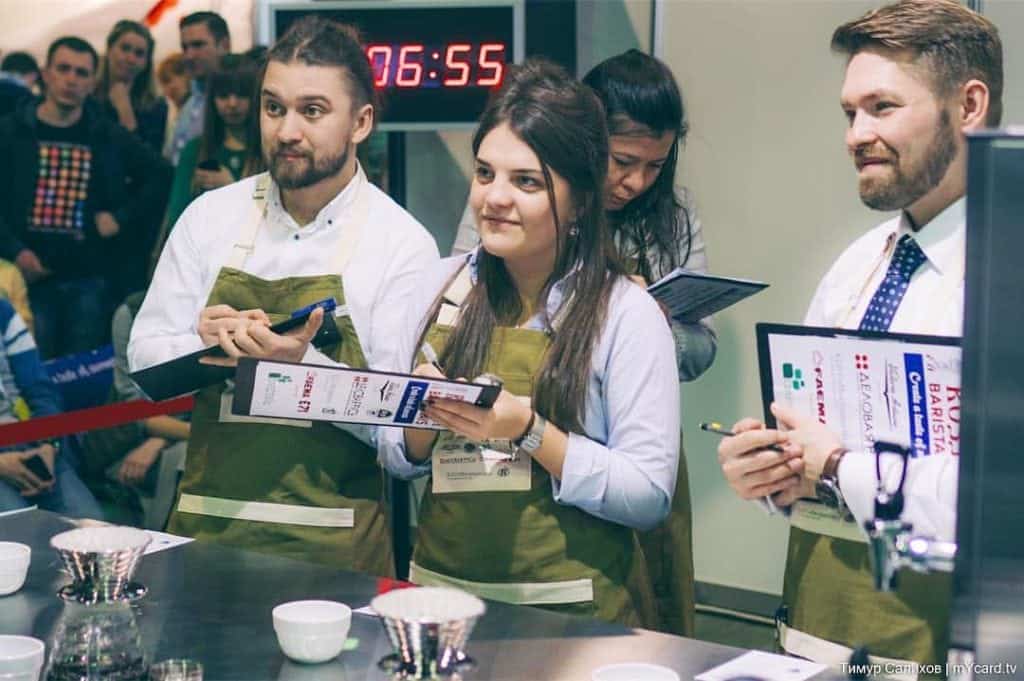 Amsterdam Coffee Festival held SCA Netherlands Competition too, Brewers Cup happening on Friday. The finals had 5 participants, 2 presenting in English. One presentation was especially good in my eyes. With a passionate story, amazing custom cups and a coffee I would have loved to try, Daniella Rene from Scandinavian Embassy team convinced not only me. I was glad to hug Daniella the next day when I came to Scandinavian Embassy for breakfast and the Brewers Cup champion was busy behind the bar. Good luck in Budapest, Daniella! 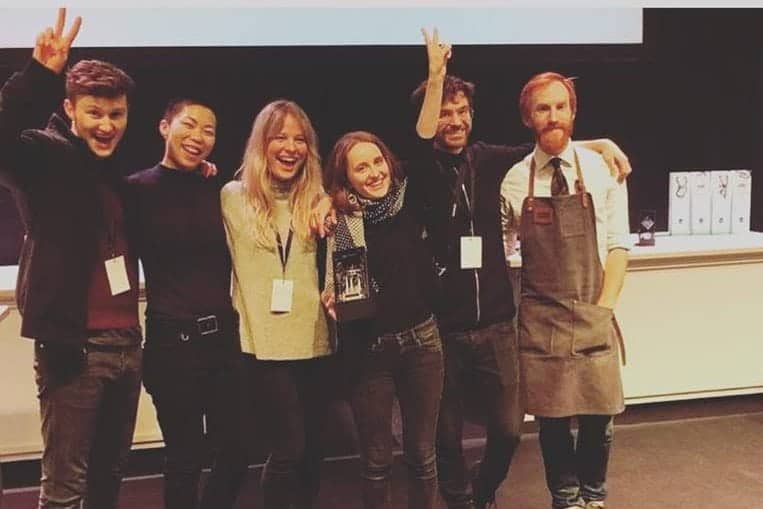 Every time I see Alexa from Comandante Grinder team I get a warm German hug and a new grinder! This time was no difference! 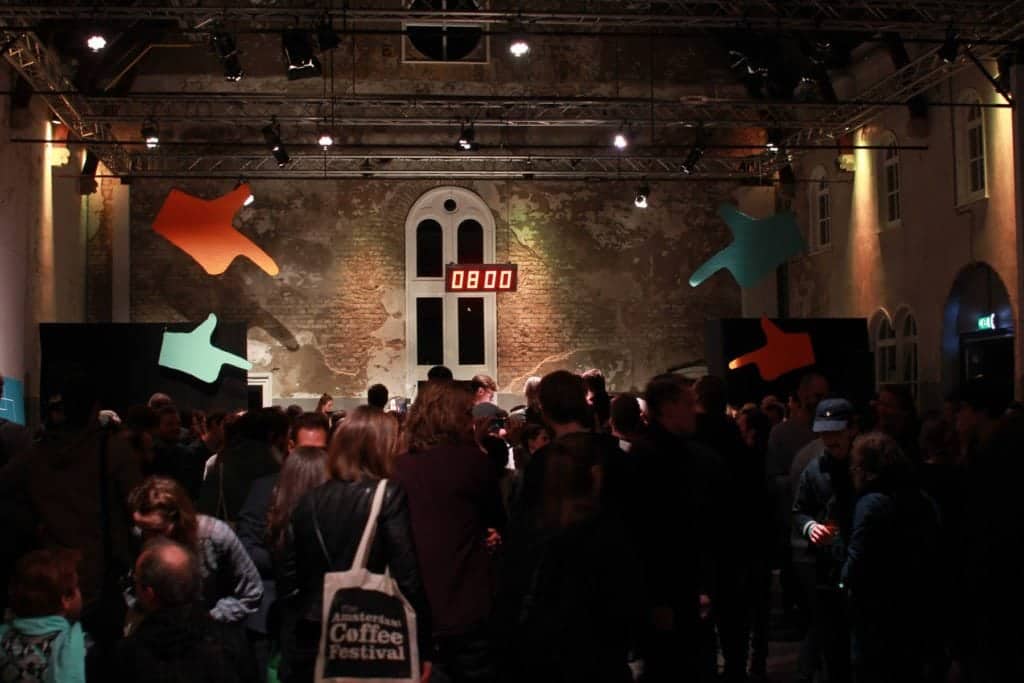 Dutch Aeropress Championship was held just next to the ACF building on Saturday evening. And what a cool and well-organized competition show it was! 36 competitors brewed 48 amazing cups of coffee over the course of 4 hours. And over 200 participants were able to have a few amazing Kenyan IPA beers and a lot of fun. Mostly thanks to MC Kim Staalman, Education Field Coordinator at SCAE and a very active Amsterdam coffee community contributor, or should I say a world speciality coffee community contributor! I am glad to have hugged Kim before the event. Hugs like this energise a lot!

One of the judges of Dutch Aeropress Championship this year was Mikaela Wallgren, Silver in World Brewers Cup 2016 and HR at Coffee Collective. I’ve followed Mikaela’s path and admire her a lot. This year, Mikaela stepped out from competition and continued as a judge. 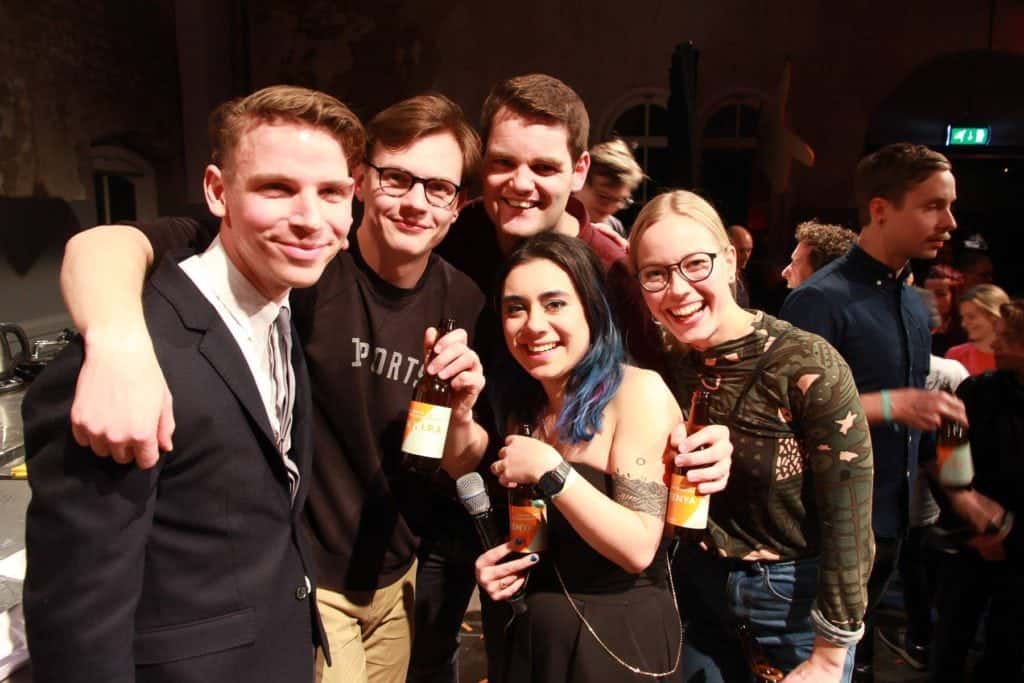 The Dutch Aeropress championship was won by Jonatan Scheeper, a talented barista, trainer, roaster and sales manager at Single Estate Coffee Roasters. I really admired the way he overcame all the competitors and although I did not know Jonatan before, I still gave him a hug to congratulate him! 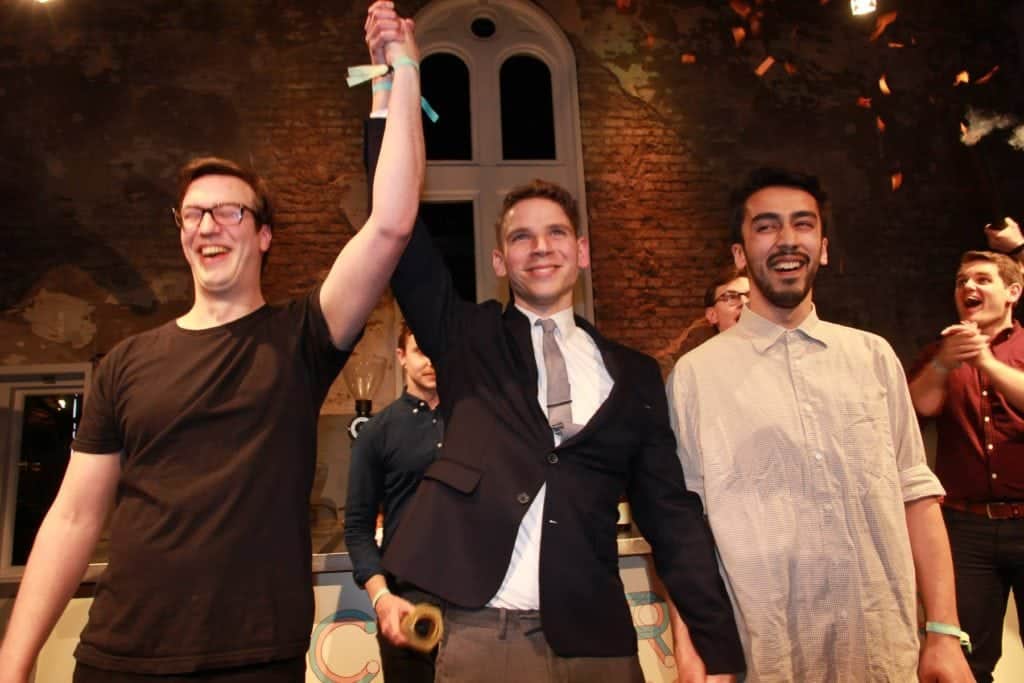 The strongest hug a girl from Belarus could get would definitely be from a man from Poland! At ACF it was Krzysztof Barabosz – SCA Poland Events Coordinator, head barista at Kofeina Art Cafe and co-founder of Akademia Kofeiny.

One cannot attend a world class coffee event and not meet an Australian. Ben Richardson, from Bocca Coffee Roasters team, is the Australian Aeropress Champion 2015 and an example of an Australian coffee enthusiast who moved to Amsterdam.

Last but not least, I managed to meet with part of the team at Friedhats, Amsterdam-based coffee roasters team, despite the fact they did not have their own stand. Of course, I wanted to meet Lex Wenneker, the 2015 and 2016 Dutch Barista Champion and 2016 World Barista Championship finalist. Dylan Sedgwick, another part of the team, originally from a small island off the coast of Australia, landed in Amsterdam after having travelled around the world, working in coffee. I managed to talk Dylan into giving me the last bottle of their super good Kenya and thanked him with a hug. 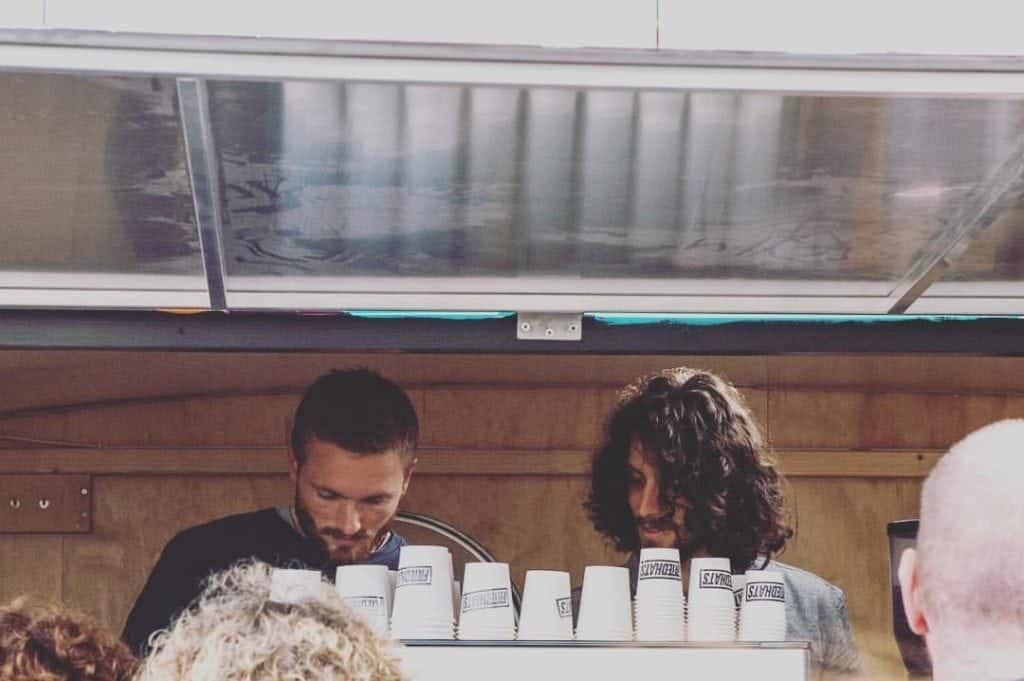 The Amsterdam sun was shining, Dutch coffee was perfect as usual and I definitely advise you to take a weekend off next year to visit Amsterdam Coffee Festival!