Water For Coffee – A Sensory Viewpoint with Maxwell Colonna-Dashwood

Prufrock, as per usual, took the opportunity to collaborate with some great minds in the coffee industry to bring the thirsty audience some knowledge. This time Prufrock’s very own Jeremy Challender invited Maxwell Colonna-Dashwood, 2015 and 2014 UK Barista Champion, to present his opinion and discoveries on water quality and its influence on coffee brewing.

The café was almost fully booked, all the comfy seats were taken and of course Kernel beer was not missing… talk water, drink gold, babe! 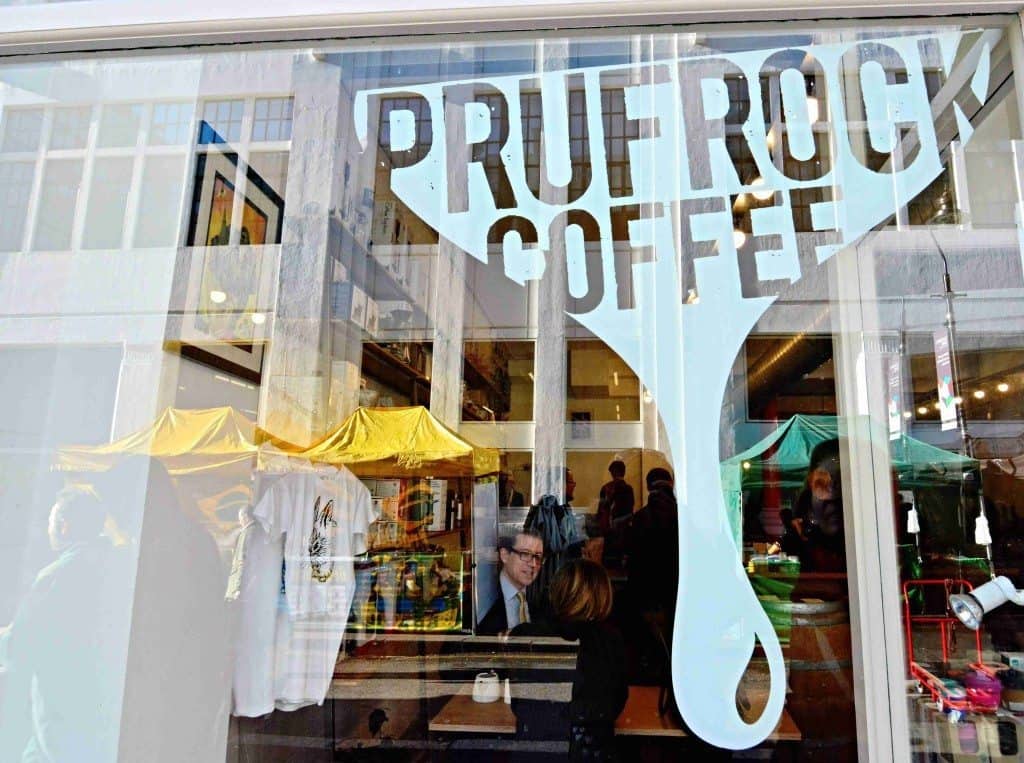 Colonna-Dashwood opened his presentation with a serving of three different batch brews of the same coffee, named A, B and C. The audience got to taste the samples and was recommended to take some notes on the differences of the brews. Later on we learnt that the coffee was a Burundi roasted by Round Hill Roastery based in Radstock near Bath, sourced by Nordic Approach.

Sample A came across as very sour, empty and sharp.
Sample B was chalky and flat, of high bitterness and heavier body than sample A.
Sample C was sweeter, with a bit of astringency to it. I thought it had dry finish when cooling down. 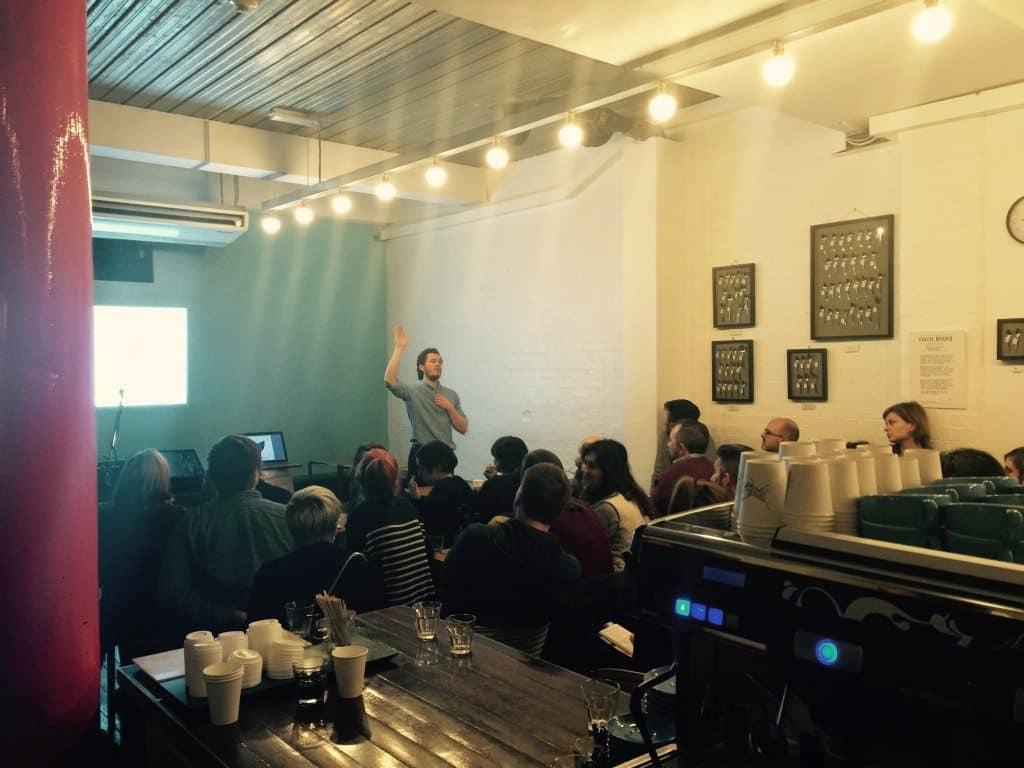 After tasting the samples Colonna-Dashwood walked us through his presentation illustrating his points on real stories. He explained how a badly tasting coffee led him to explore the subject of water quality and its importance on the taste of our brews. Many interesting questions were presented. What is the real flavor of a certain coffee when water quality is always different? How do hard and soft waters influence our brews and what is the definition of good water then? Another story brought the chemistry part into discussion. 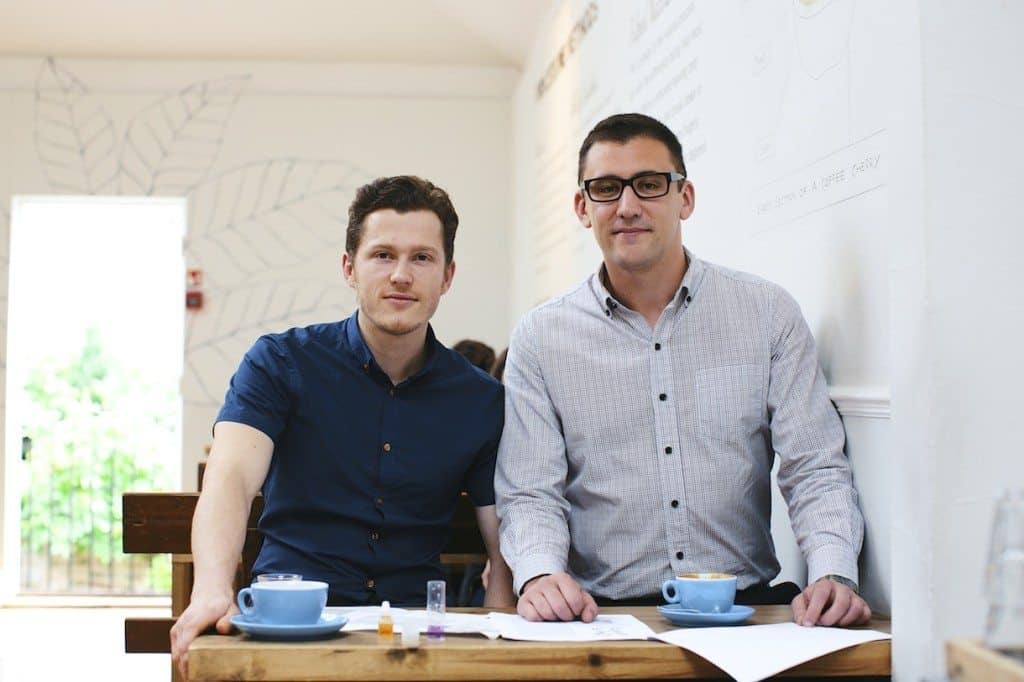 Colonna-Dashwood has been working on a large study of water together with Christopher H. Hendon, a theoretical and computational chemist at the Department of Chemistry, University of Bath. Their discoveries helped Colonna-Dashwood win the 2014 UK Barista Championship. Their collaboration is now at the point of a soon-to-be-published book from which we were offered an insight via a graph. The graph deviates from its antecedents presented by SCAA, SCAE and from work by Vince Fedele of VST and others. It puts carbonate hardness versus general hardness in a way that a user can understand better the way the two interact.

From the chemistry point of view, the most influential elements for our coffee brewing are Calcium, Magnesium and the so-called Buffer (Bicarbonate/alkalinity). Water contains number of other elements, but those three would be the most influential ones. The ratio of the general hardness of our water to its carbonate hardness is crucial for the resulting brew. Calcium and Magnesium create the binding energy that extracts the good stuff from our coffee. We get here to the crucial point of Colonna-Dashwood’s presentation. Coffee is a solvent. We are interested in how much of the ground coffee beans is dissolved in our resulting brew. 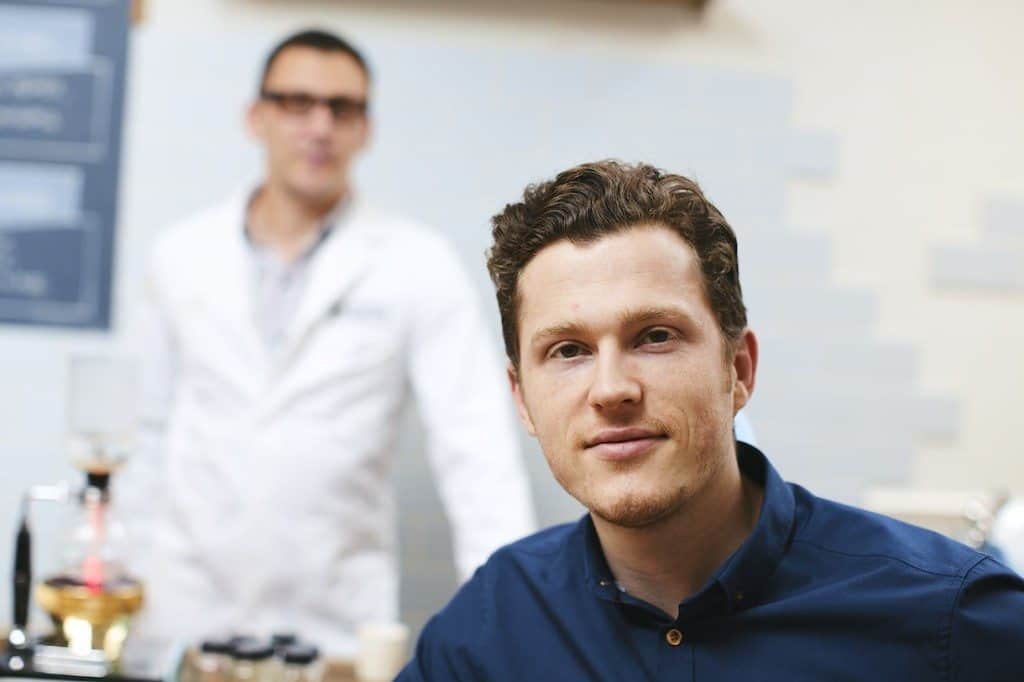 Using his graph Colonna-Dashwood clarified what levels are classified as suitable for filter coffee brewing, espresso brewing and what is classified as multipurpose water by the SCAA. Water that he used was outside of those ranges in two cases. The audience was explained that:

Know the quality of your water

Colonna-Dashwood helped us to understand the importance of the subject and took it even further with several explanations and recommendations on water filtration systems suitable for the café environment and home. A good water quality check for home use would be a Water Drop Kit. Knowing the levels of the carbonate and general hardness gives us an idea on the water quality, but it does not help us to improve the water itself.

For home brewing Colonna-Dashwood recommended to use bottled water of different types, trying out several brands and finding out which brand is the most suitable for the coffee we are currently brewing. The water he would use if gone into the wild (true story!) would be either Waitrose essential, Volvic or Ashback, which he experienced so far as the most suitable ones in the UK. Other brands within different countries would need to be tried out based on their mineral contents, which should be stated on the packaging.

Water made to your preferences

There is another way of brewing coffee at home with better water and it is with water of certain characteristics. Where do you get water of the carbonate and general hardness you want? You make it yourself. You measure what is already in your water and you add minerals that are missing. By controlling the amount of minerals put into your water you are basically stepping up your brewing recipe. By controlling what you have you influence what you will get out of it. Brewing coffee properly requires precision and control, checking the time, the amount of coffee and water inserted and gained, the solubility, the temperature, the grind size. Water quality is undeniably part of the equation and should not be forgotten.

I believe we should always try to know our ingredients in the best way possible by testing them in many brew ratios and brew methods. Water makes up to about 98%-99% of our brews and it deserves to be considered one of the most important aspects in our brewing.

Measure, test, experiment and then enjoy!