How did you brew your coffee today? Do you know what kind of water did you use? Do you know what was its TDS, PH and if it followed SCAA recommendations? Don’t worry, this article is not designed to embarrass you, nor to test your knowledge. It is supposed to shine light at the depth of knowledge that went into supplying water to the competitors at World Brewers Cup Championship.

The person responsible for a smooth water operation, backing up the competitors in Dublin, was Gary Norwood, Brita Professional representative. Brita makes sure the water for the whole championship is of a constantly high quality and equal measures for all competitors. If you had any water related questions, Gary was your water guy! 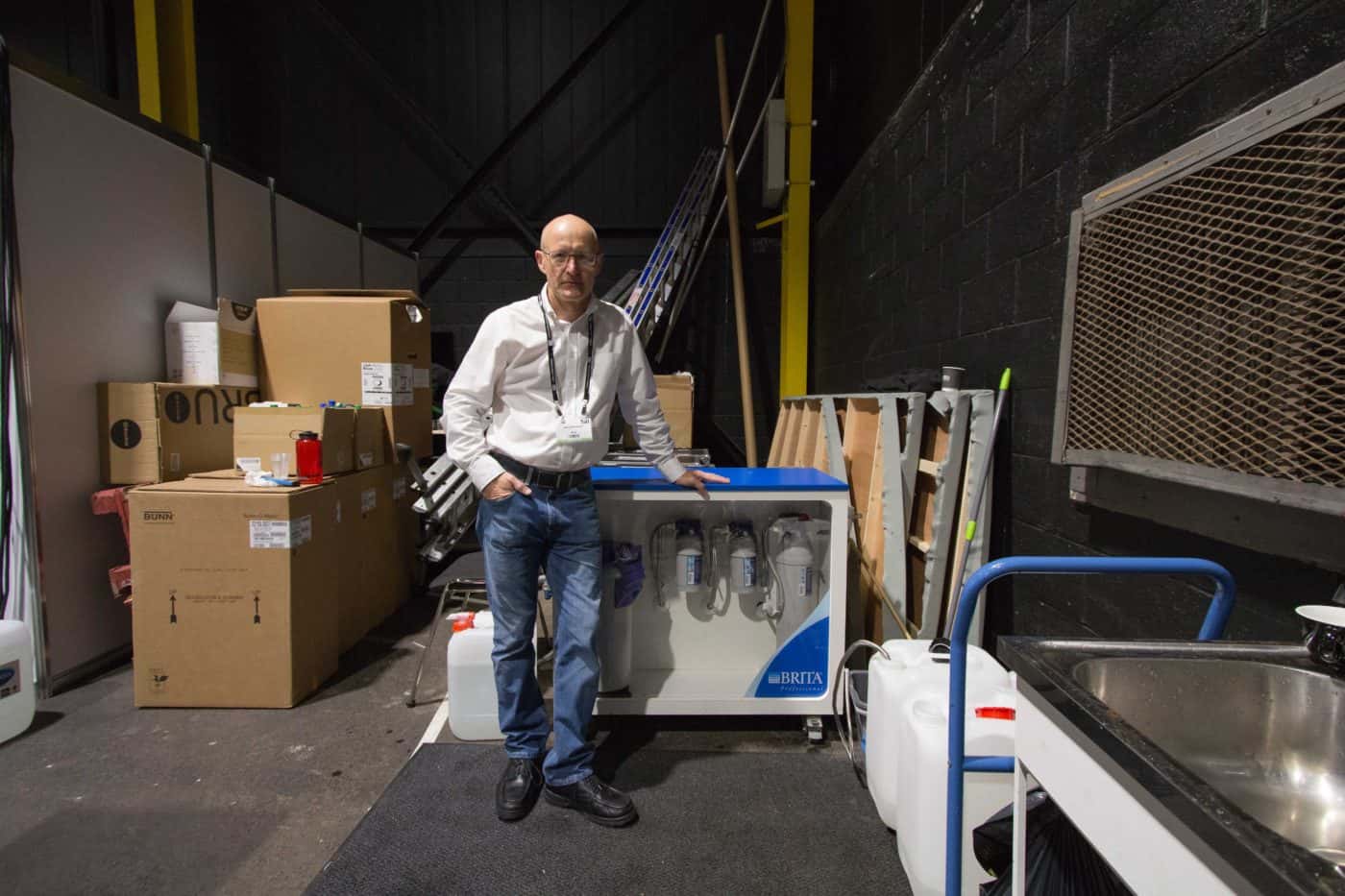 Let us ease you into the outline of the competition. At World Brewers Cup Championship every single competitor has to go through two rounds, an open service and a compulsory one. The open service allows the competitors to use coffee, water and grinder of their preference, but the compulsory round is quite the opposite. In Dublin, all of the competitors were given the same coffee to brew, and for the first time in the history of the competition they were also provided with grinders from the same manufacturer. Last but not least, they used water of the same parameters. This rule is in use to compare competitors’ knowledge and brewing skills when they are under equal conditions.

You could possibly compare it to a photographer trying to take the best possible picture with a camera he has not used before. What separates the best from the rest is how quickly they adapt to the new conditions. In other words, how well they know the fundamental principles that apply to coffee brewing. Competitors who have the most experience working with diverse range of machines and beans will most likely have a big advantage. 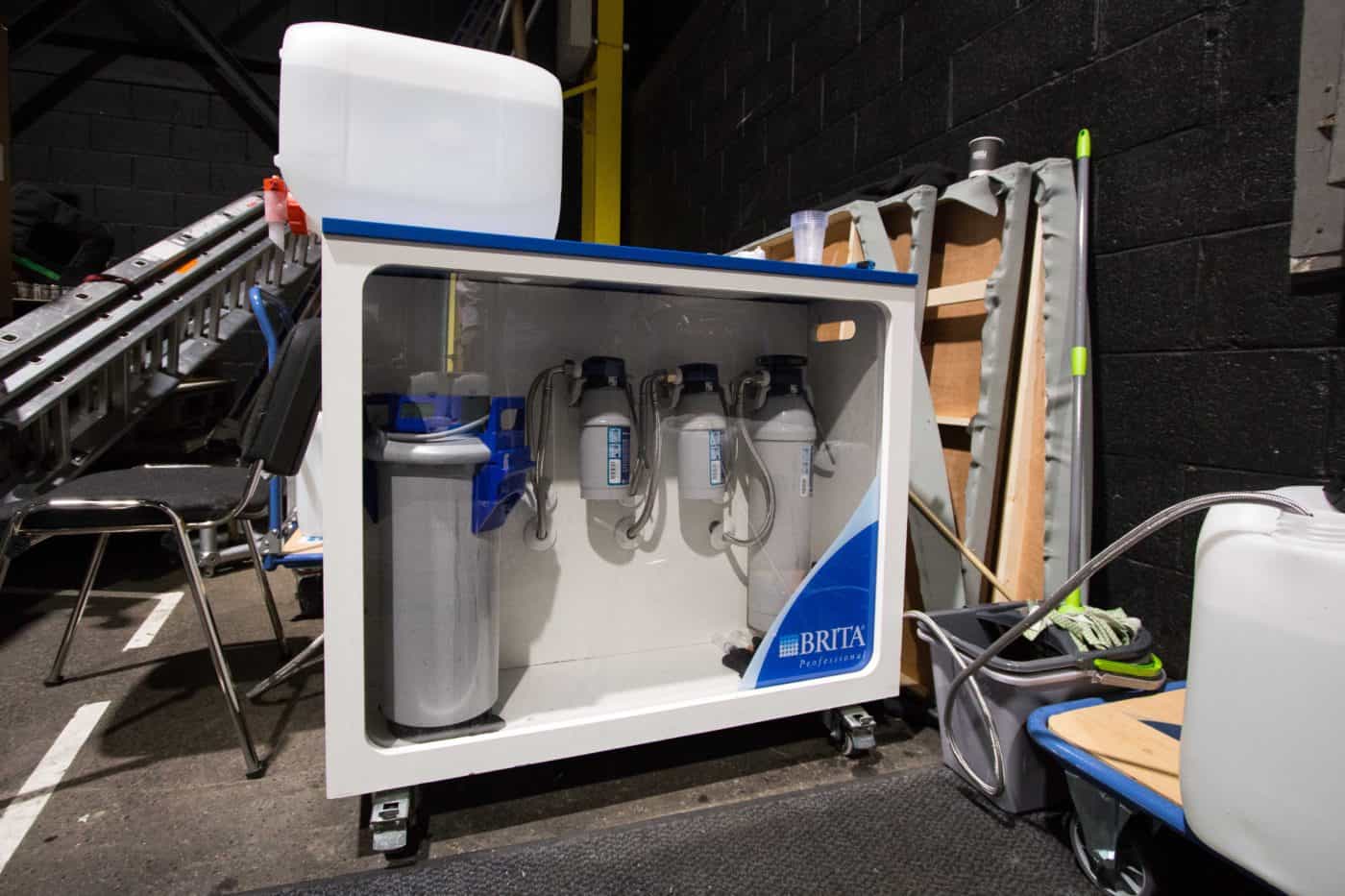 A championship in coffee brewing suggests there will be a great amount of coffee, and for that you also need a sufficient water supply. Brita Professional takes care of that. This water needs to be “built” to fit the demanded parameters. The recipe for such water will also depend on what is the water like at the local source. In order to prepare, in this year's total 4,700 l of water, Gary and the team had to start the preparation more than a month ahead of the competition. “We sent water samples to the lab, we got full chemical analysis. So we knew exactly what we were going to encounter at the location,” explains Gary. With the full analysis they could then bring all the required tools and could pre-arrange the setting. “Rather than waste a lot of time, when we got here, trying to evaluate it all, we could plan it in advance,” added Gary. Not only did Brita secure the actual water production, they also needed to manage the logistics of jerrycans, deliveries and how many people they had to have on hand. It required some heavy lifting, too! 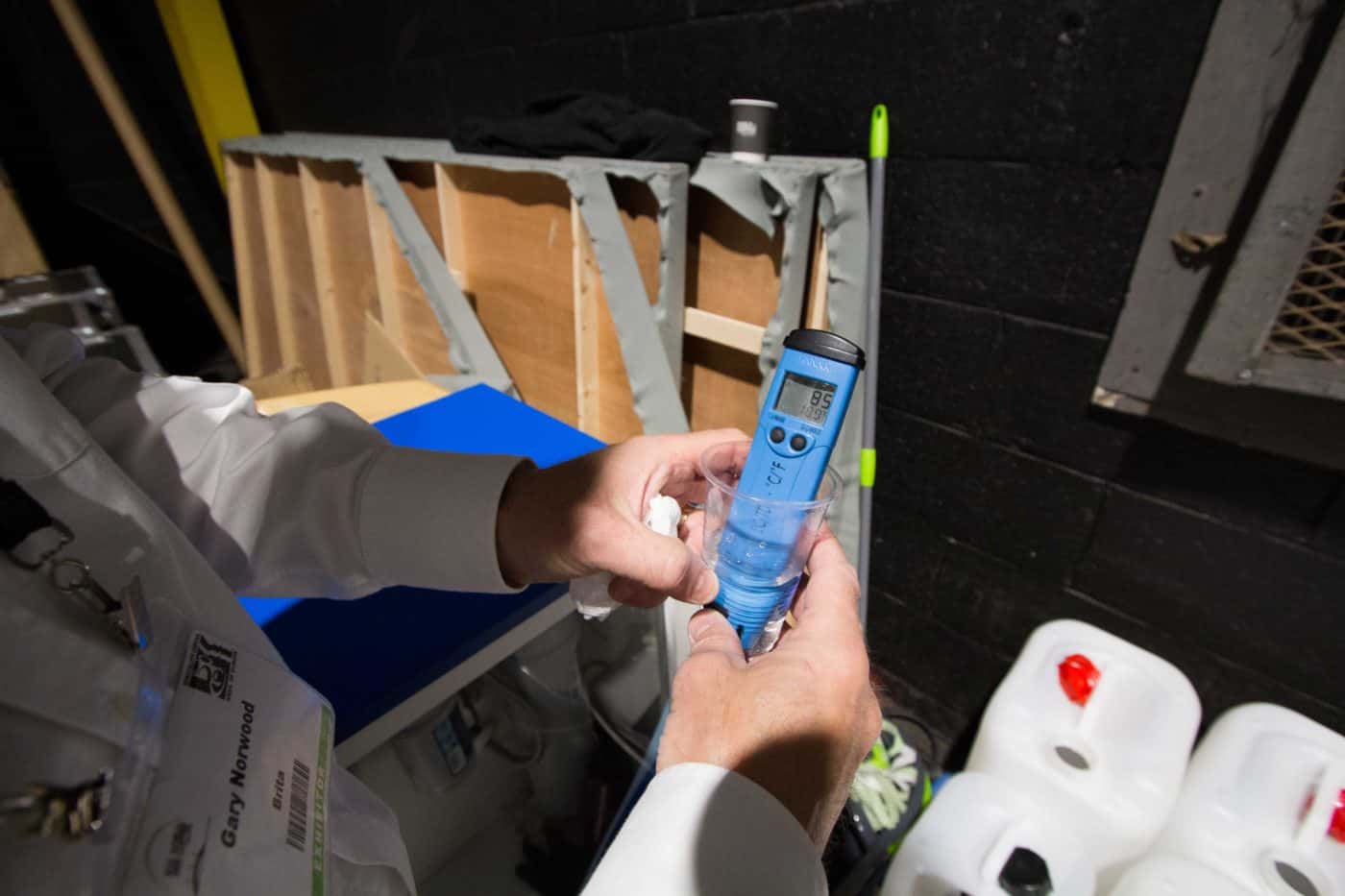 What were the requirements for the water, you may ask!? “There was a new specification for the water for the competition this year. TDS we were aiming for was 85, the main source of water here in Dublin is 91, or 92, so we only needed to make small adjustments. The water still needed to go through a carbon filter, and the PH was also a little bit high.” It is not always like this, Gary remembered WBrC in Rimini, two years before: “Water was probably 600 TDS, so there was a lot more work to be done to get it down to the required standard, and to keep it there, as well. Here in Dublin the balance of Calcium and Magnesium was almost what was required for the competition, so we did not have a tremendous amount of work to do.” 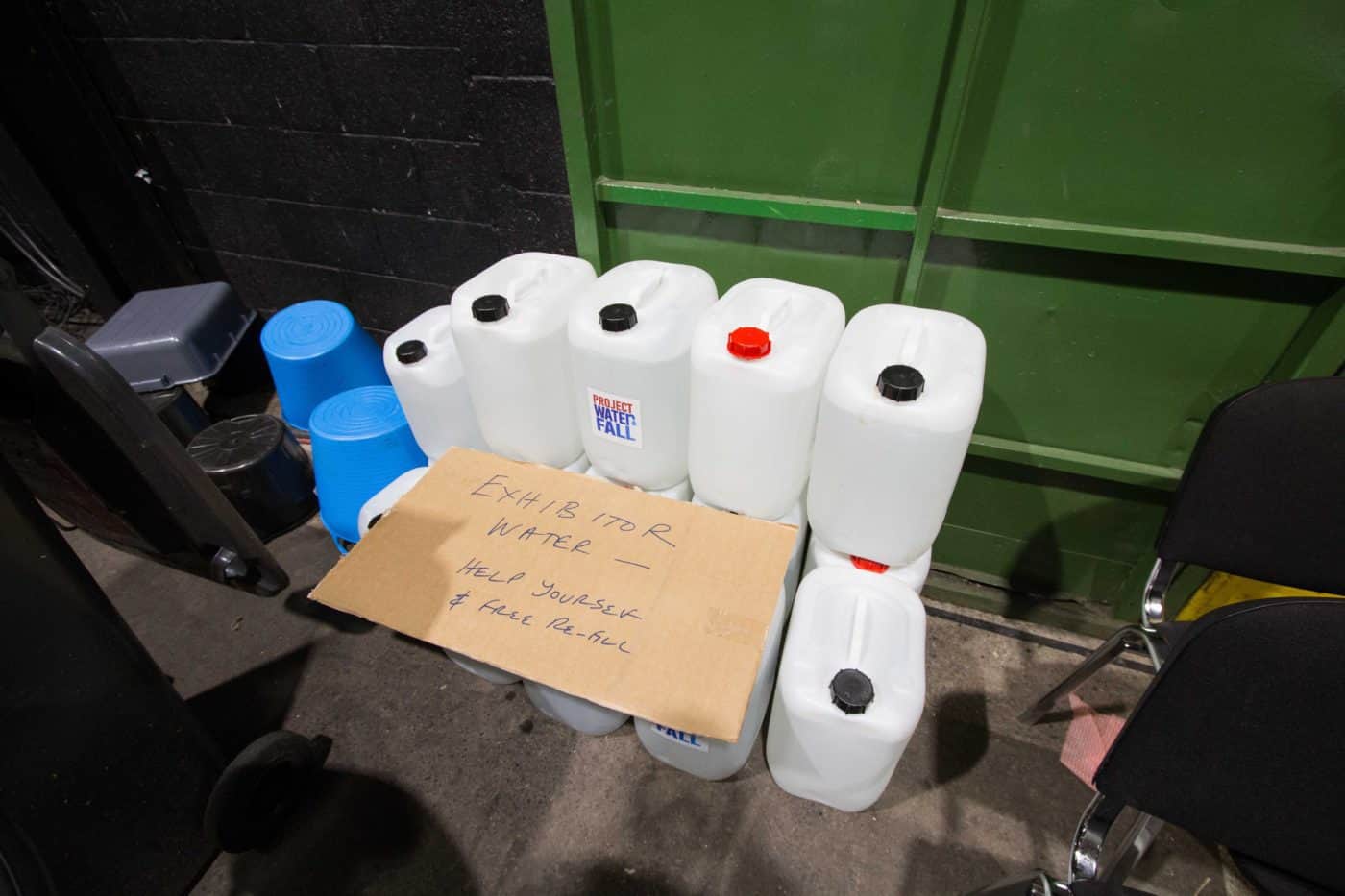 It was not only about setting the water to the required standards, but also about filtering and producing it in quite a large quantity. “All the competitors here needed plenty of water for practice. We had the same water here [on stage] and in the practice area.” Gary tested the water every few hours to make sure it was consistently of the same values, without any specs variations. “This year, to make it easier for the competitors, we bought these smaller jerrycans[10 l], because many competitors would like to take the water back to their hotel room. To practice over night. We thought that to be a more convenient way of doing it, in the lead-up to the actual practice time [backstage]. We thought it might make life of competitors a little bit easier.” It certainly did help the competitors to prepare the best way they could, as confirmed by Karolina Kumstova, the competitor representing the Czech republic. “I brought the ten litres back to my accommodation and brewed almost the whole night, prior to my competition day. I compared the water with another sample I considered using on stage. I appreciated having more time to experiment, outside of the busy area backstage.” A Barista Guide to Speciality Tea – What Does It Take to Serve Quality Tea?

Competition water was filtered and produced in a special unit. Created by Willem Huisman, sales director of Brita Professional, in Benelux, it combines commercially available filters, so that they are able to produce whatever water people want! It is now used for events all around the globe. At the London Coffee Festival, for example, they had two units and filtered over 20,000 l of water in four days! The event was of a different character, with more consumers, rather than traders, using the sponsored water. Unforgettably, the water in London was very different from the water in Dublin, and the resulting specs were different as well. 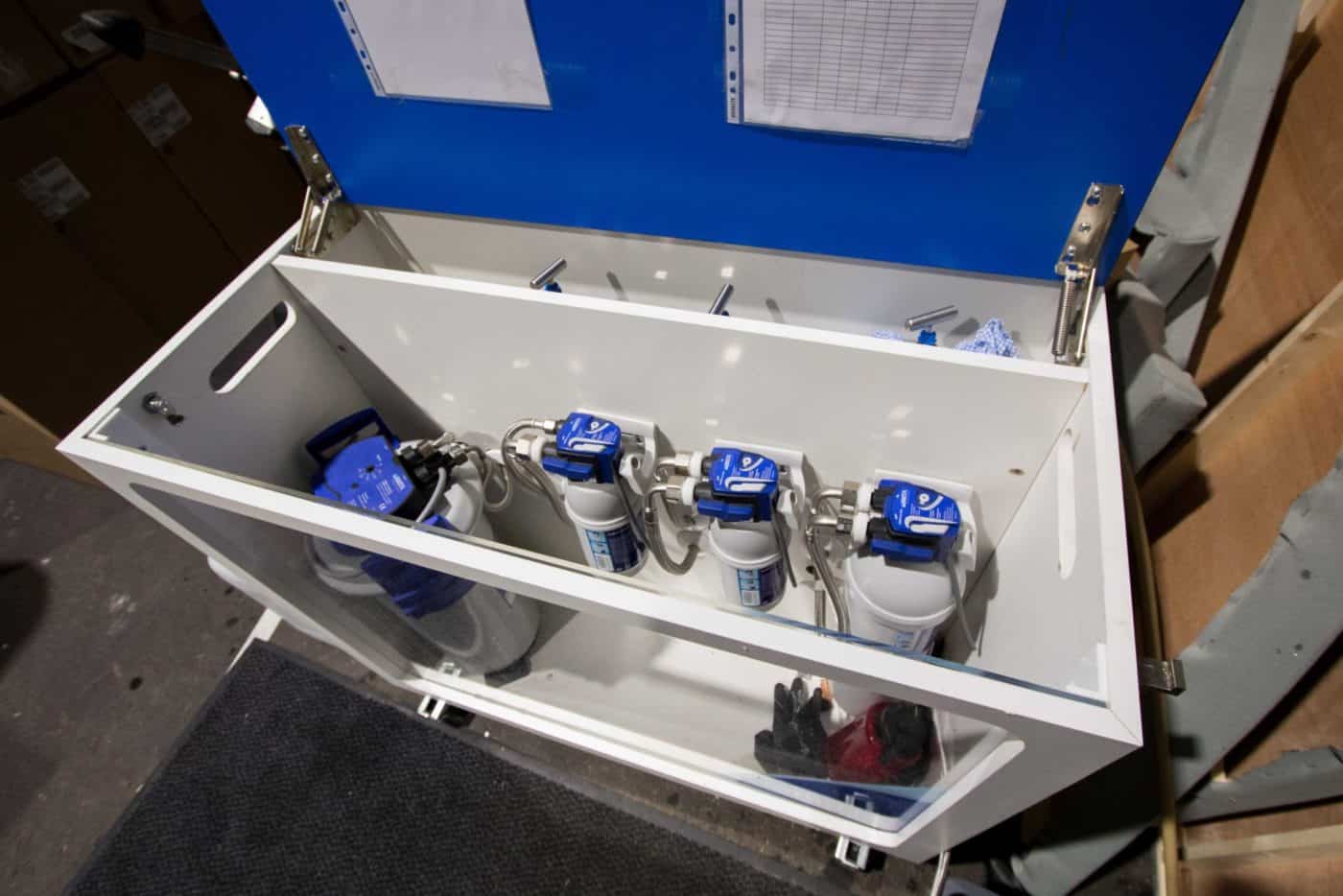 Before we left Gary so that he could roll out another round of jerrycans to the competitors, we asked about the most interesting water at the competition. It was Todd Goldsworthy, US Brewers Cup Champion, who wanted his water to be of 105 TDS and a specific mineral content for his open service. “He had some minerals, we started with a half container of water, he added his minerals and then we topped it up, we measured it and tested it, and it was only when we got it at the spot he wanted it that he would accept it.” 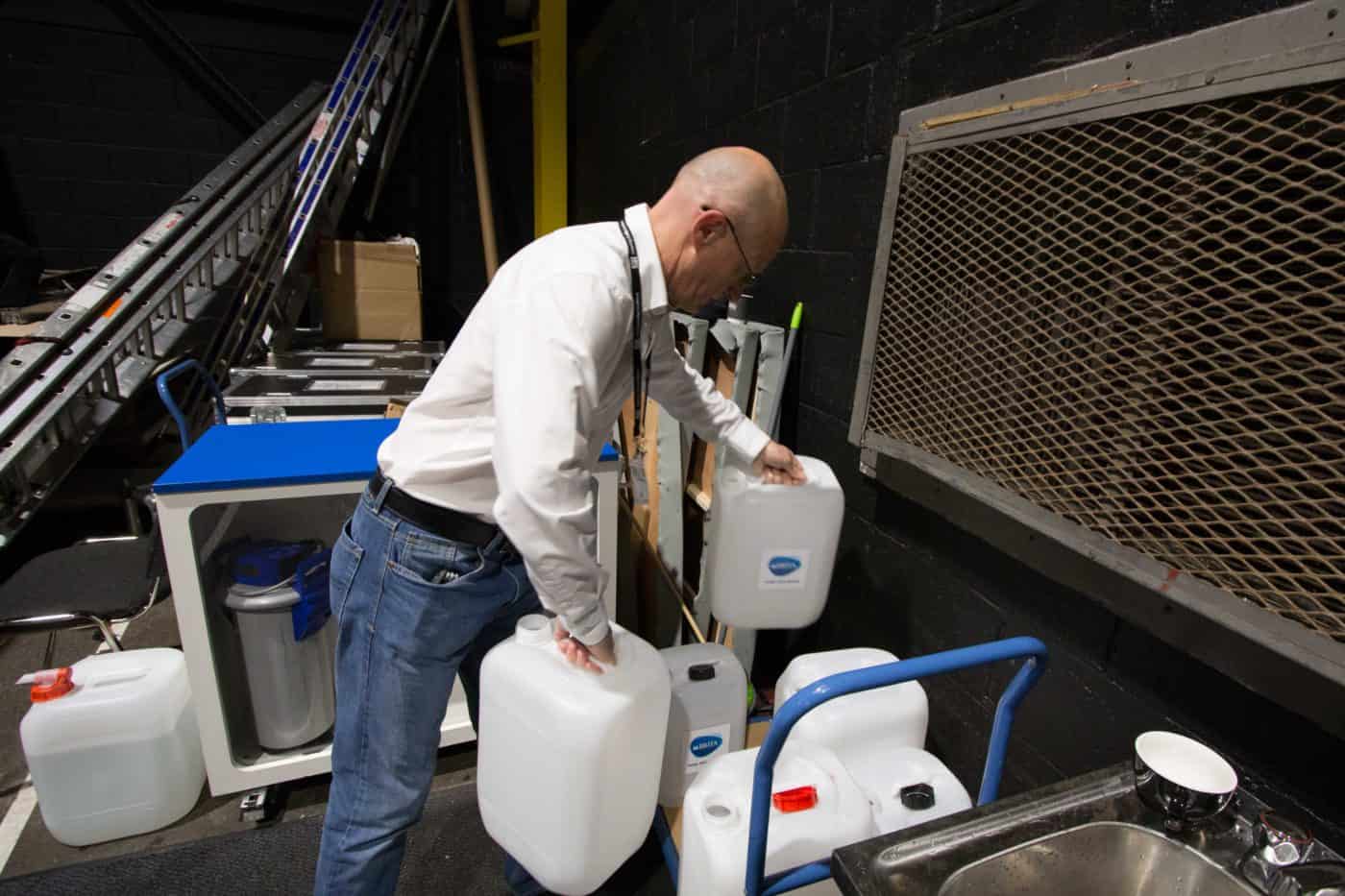 Do not be surprised when you see people running around with a jerrycan of water at next coffee event. They are probably in the middle of preparing to brew the most delicious cup of coffee possible. Go taste it, then!