World Coffee Events is an event management organisation producing multiple coffee-related community events. Beside for other competition categories than just World Brewers Cup, it also supports education and discussion by organising show features, such as Espresso Bar and Brew Bar, throwing Coffee Film Festival or organising Re:co the Speciality Coffee Symposium and participating at events such as TEDx.

Brewers Cup Championship had been gaining more and more attention at national levels, attracting more competitors than in the previous years. The growing numbers might be surprising! In Poland, Polish baristas have two times higher interest in the competition this year than in the Barista category. As the spring approaches, we are getting excited about this year's Worlds finals in Dublin, Ireland happening 22-25 June, 2016. Ales wrote this article for WCE Year in Review and we find it more than fitting for the competition season to come! 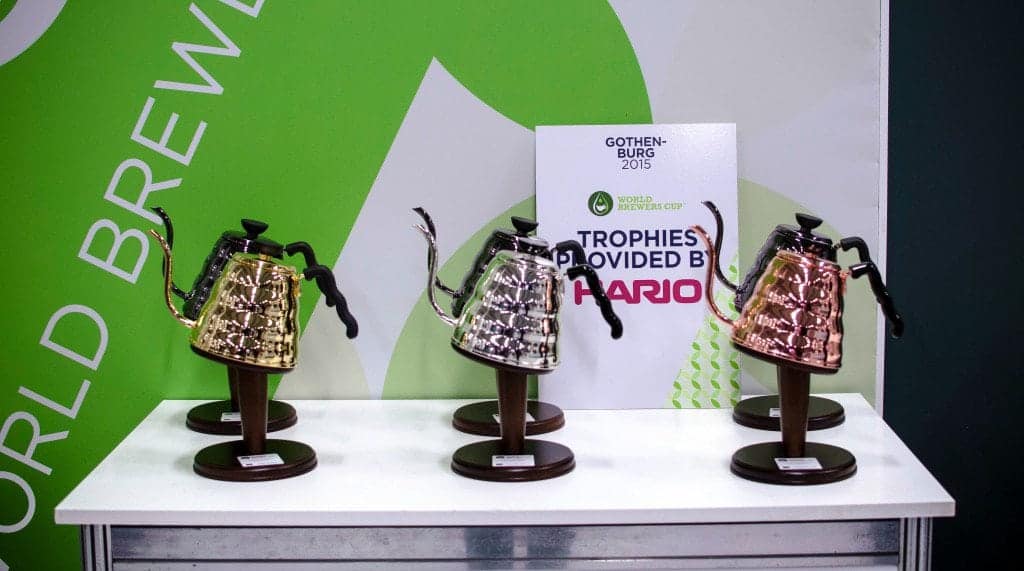 In 2011, Keith O'Sullivan stepped on the stage with a huge surprise to find himself in the finals next to James Hoffmann and Stefanos Domatiotis, both coffee experienced veterans. He was an amateur, as he put it in his own words, but can one really be called an amateur when he gets to the World Brewers Cup finals?

O’Sullivan confessed it hadn’t taken him that much time to prepare and that it was one particular coffee from Bolivia that convinced this PhD candidate to give the competition a go. Five years later, Odd-Steiner Tøllefsen, professional barista and photographer from Norway, spent nearly a whole year preparing his routine to win the title. Travelling to coffee origin, sourcing coffee, sample roasting, selecting the right beans, cupping, and preparing the routine: this is what it takes to win the World Brewers Cup these days, demonstrating how the competition and its level of excellence have developed over the past years. 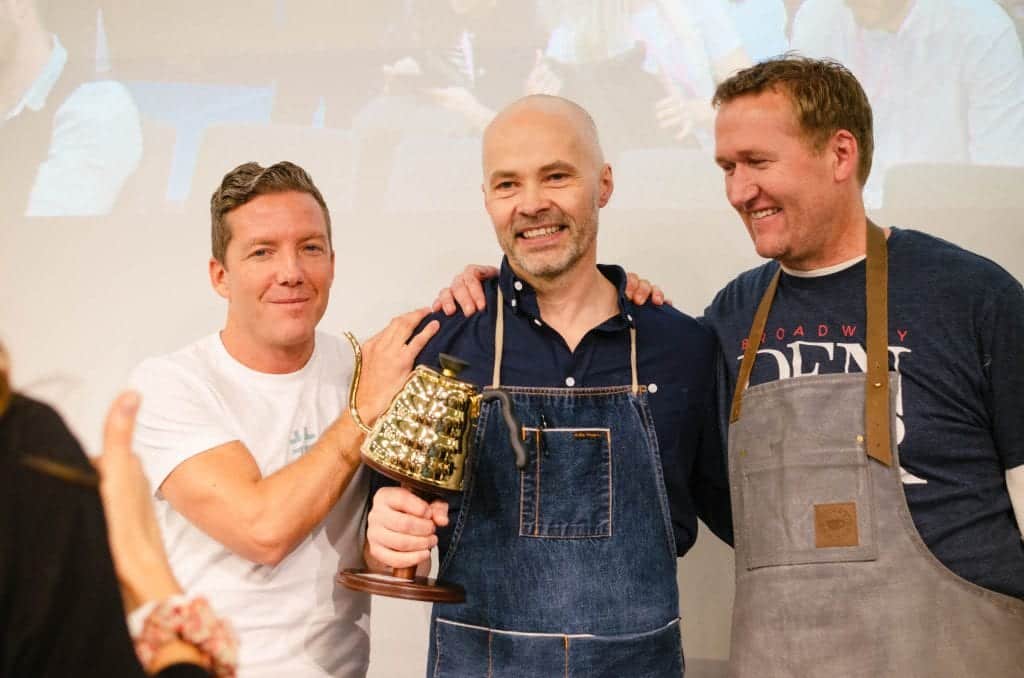 Compared to the World Barista Competition, founded in 2000, five years is a relatively short amount of time to develop, but year after year more baristas and countries take part in the World Brewers Cup. The competition is simple in its form – “black, manual, hand-brewed coffee made to perfection,” as Odd-Steiner 2015’s World Brewers Cup Champion describes it. It’s about unlocking the potential of coffee, brewed by a barista in ten minutes in front of judges. It takes a huge amount of time to make the best out of these ten minutes though, and in a way, competitors are preparing every single time they brew coffee in front of their customers. Customers today are the ultimate judges; judges who don’t fill scoresheets, yet provide the barista with instant feedback by a smile or a comment.

In Brewers Cup, there are two steps that every competitor must go through. In the compulsory service, every competitor uses the same coffee (unknown to the competitors prior to the competition) and the same standardized brewing device. This round tests their general knowledge about coffee brewing and the ability to quickly dial in this coffee, find its “sweet spot” using the competition-provided brewing vessel. On the contrary, open service is about hospitality and the knowledge about coffee that baristas share. They carefully picked their coffee and brewing method which they have a chance to explain and inspire with, taking judges on a journey of discovering the best possible experience they can provide them with this particular coffee. Tasting notes can go as far as ‘eating a grapefruit in the shower,’ as Benjamin Prager, 2015 Brewers Cup Finalist from Switzerland vividly described the fresh mouthfeel of his Kenyan coffee. Moreover, competitors must be very consistent as they individually brew coffee for each of three judges.

Water makes a significant impact on the resulting cup of coffee in Brewers Cup. “In the past, water filtration was used only to protect machines from scaling up,” points out Willem Huisman, sales director at BRITA Professional, World Brewers Cup Qualified Water Filtration Sponsor. “During this process, we also discovered the improvements in taste by filtering out several off-tasting minerals,” adds Willem. As international transportation of competitors' own water may be risky and difficult, most of them share the water specification in advance and BRITA’s support team do the best to fulfill their requests in the field. “We can create the individual water for every single competitor but in most cases, they make use of our standard one,” adds Willem. Odd-Steiner took the risk and brought natural mineral water from the West Coast of Norway with him – water with a low mineral content that fit well his coffee. 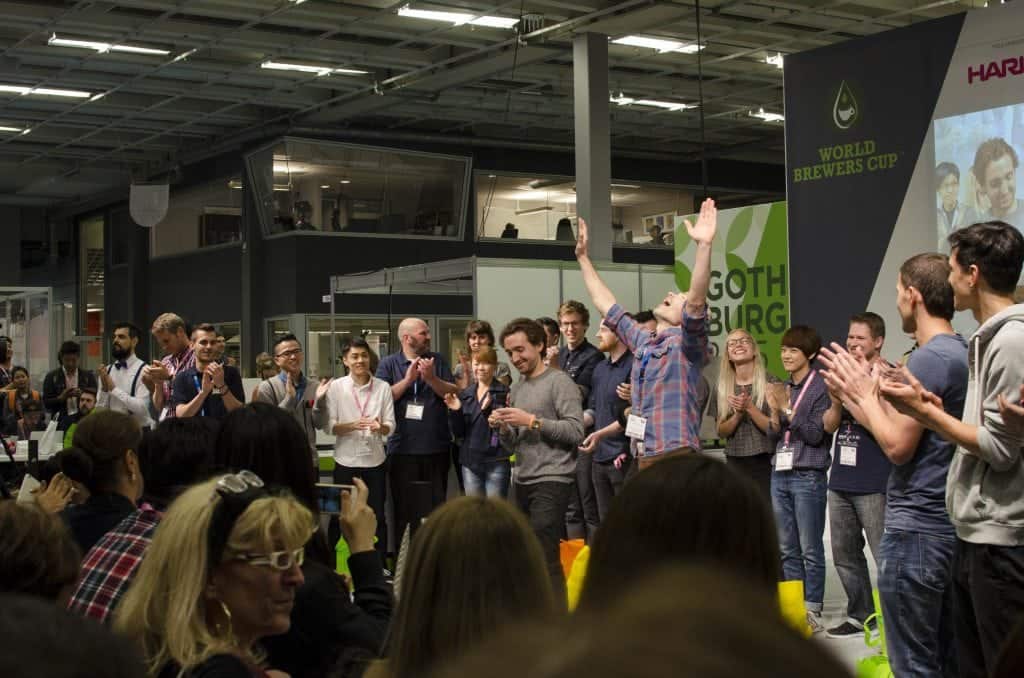 It wasn’t the only risk that the current champion took. He used Acaia scales connected via Bluetooth to iPhones that he placed in front of judges. “My first thought was this was going to be cheesy… But after a while I started to like the idea that the judges could monitor my brewing,” explains Odd-Steiner his thought process. “I am always very accurate when brewing and I wanted the judges to see it with their own eyes. There was no room for error. I knew the blooming time would be 35 sec, pouring time 3.00 min and total extraction time 3.30 min precisely. Noone had done it before!” laughs Odd- Steinar, knowing his risk paid off.

Do You Accept The Barista Challenge 2016?

This championship represents innovation in brewing and its precision, but Brewers Cup is obviously also about exceptional coffees. Many people returned from the competition area with a strange excitement in their face, saying: “There is coffee that tastes nothing like coffee. It’s very sweet but …” struggling to describe what this experience was like. It reminds us of similar feelings we have many times when tasting speciality coffee, but this coffee excellence takes on new meaning when it is the coffee professionals blown away by the coffees' quality. Sarah Anderson, the 2015 World Brewers Cup finalist from the United States, brought one of these coffees, allowing both judges and audience to try Cafea Eugenoides. “It’s not even Arabica species, this coffee is known as the mother of Arabica,” Sarah surprised the full room of coffee professionals. “About 10 to 15 thousand years ago Eugenoides combined with Robusta to create Arabica which we use in speciality coffee everyday.“
People, as well as judges, are more open to ‘new’ coffees. Experimental processing methods, natural processing – it seems it is not only Geishas-ruled competition anymore. 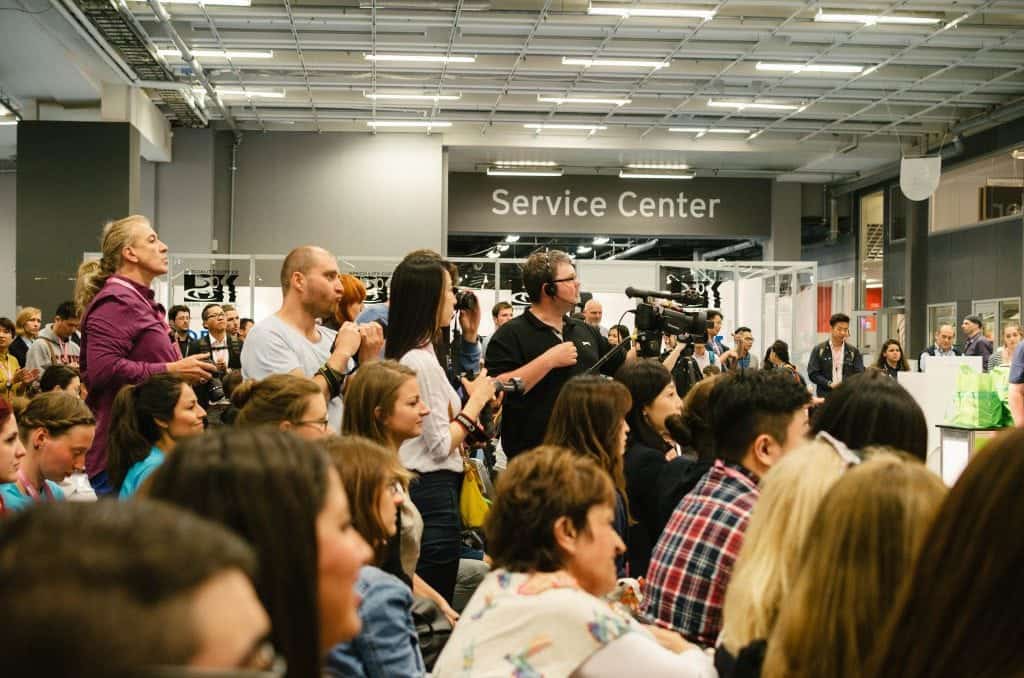 “People want to explore and discover more than ever.” That’s how Odd-Steinar describes the current state of speciality coffee. So, what coffee won the World Brewers Cup in 2015 then? There is no surprise that it was a naturally processed coffee. Supreme Roastworks, an Oslo-based company that Odd-Steinar joined in 2012, has always been focused on natural processed coffees and they were eager to prove that it can win a big competition too.
Odd-Steinar’s brewed coffee had intense dried apricot, mango, passion fruit, and strawberry flavours combined with a sweet, ripe tropical fruit aroma. It was coffee from Semeon Abay Maker Series, an Ethiopian naturally processed coffee from Ninety Plus’ production. Right after the competition, there was only 50 kilos left, 35 kilos with Ninety Plus and 15 kilos in Oslo. Interestingly enough, this coffee was a “past crop.” It was left resting for over a year but there was nothing that could come even close to the quality of the coffee, even when tasting the fresh crop at their roastery. Once again, a prejudice about processing was shaken to its core. 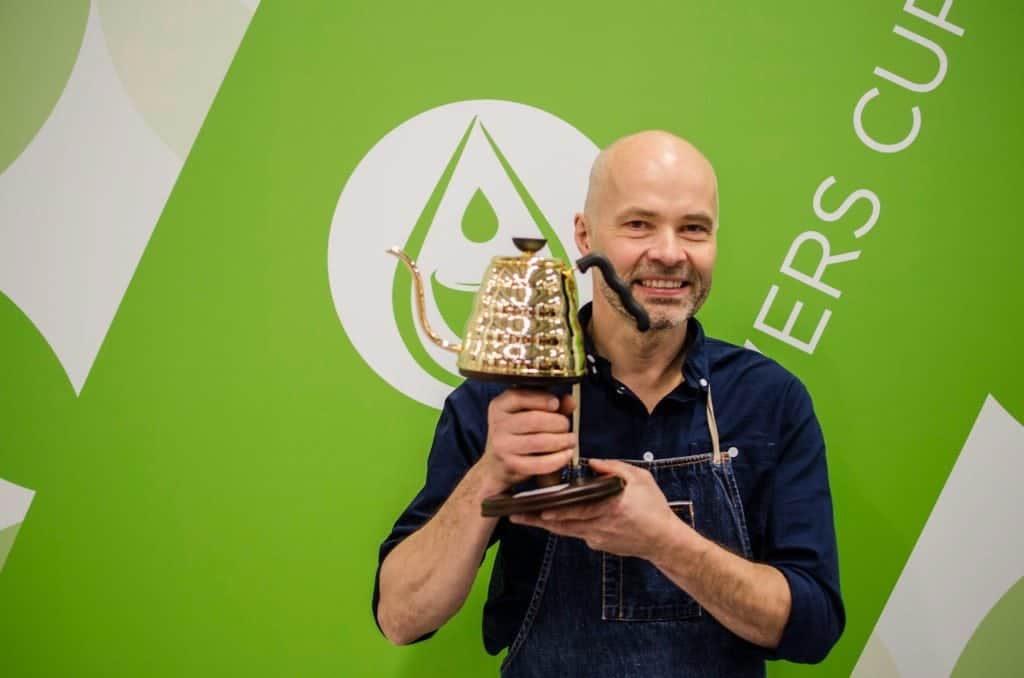 Odd-Steinar and his whole family will remember this competition year for one more reason: right in the middle of the Norwegian Brewers Cup, timed between open service and the finals, his son was born. As his girlfriend had suggested a coffee-related name, they had made an agreement that if Odd-Steiner was to win the World Brewers Cup Championship, they would name their child Sidamo, in honor of the coffee he used. In Gothenburg, during the media frenzy following the awards ceremony, Love Sidamo Tollefsen was smiling into cameras with his father. Let’s wish young Love Sidamo and the World Brewers Cup many thriving years ahead.