Two of the major roasters on the Berlin coffee scene are little necessary to introduce—The Barn and Five Elephant. Both companies have made a reputation for themselves of roasting great coffee, serving it from their established locations in Mitte (The Barn) and Kreuzberg (Five Elephant). They have been active on the European coffee scene and beyond. 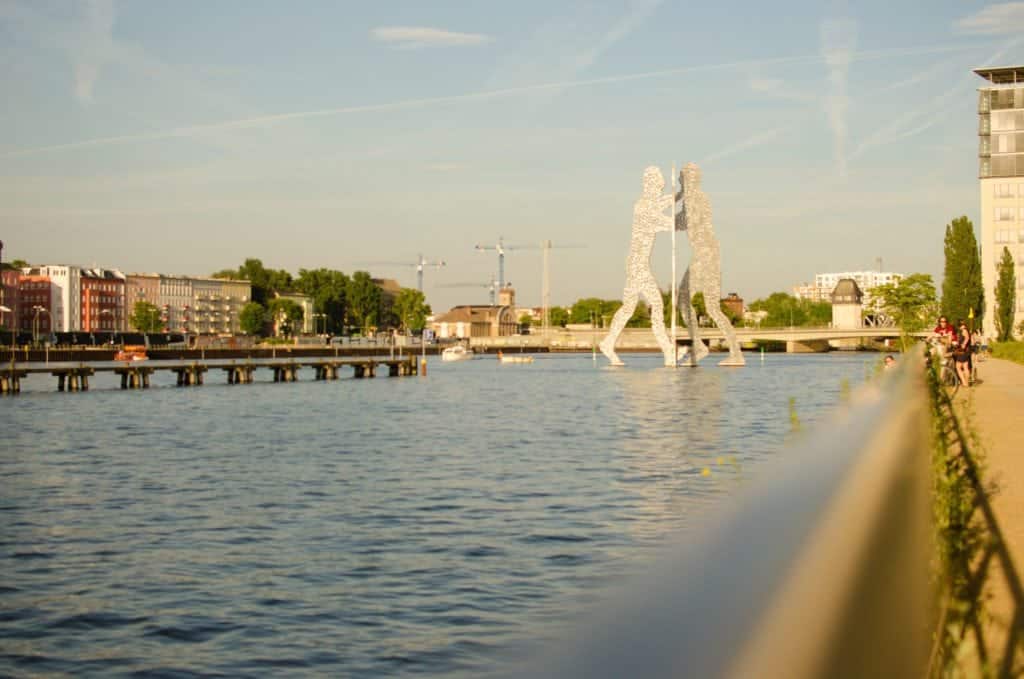 The Barn’s and Five Elephant’s shops and roasteries are the two places any coffee enthusiast, geek, or foodie would visit because they have been an inherent part of the Berlin coffee scene for years. We were excited for both of the companies to step into a new era of their businesses, opening new shops outside the districts of their original locations.

Five Elephant’s coffee shop is a neighbourhood cafe in Kreuzberg, nestled in a small shop on Reichenberger Strasse. The space that used to host the roasting business, as well as the bakery and the cafe, had to overcome a local resistance to anything new in their beginnings. Eventually, they became (not only) the locals’ favourite thanks to their sweet cakes and coffee of a continuously growing quality.

The Barn’s location on Schönhauser Allee is a rather large shop, housing the roastery section and the cafe as well. Besides for being one of the German roasters the most represented on the international market, they also became (in)famous for their strict customer policies within their roastery. They have been serving the crowds quite successfully though, covering the coffee service in the Mitte area additionally with their first, smaller coffee shop on Augustrasse.

Despite the roasteries’ established businesses and rising numbers of cafes using their beans, Berlin is still their major game field. It is their home. It is only natural for any business to expand its operation and so both The Barn and Five Elephant stepped into a new era 4 months ago. The new cafes are both very different from the original concepts, each in its own way.

Five Elephant’s new location could not be more different from their original cafe. The place is a step into new everything. The company found a new home in Mitte, the touristy and very polished area of Berlin, coming from the edgy and very German neighbourhood in Kreuzberg. They transformed their coffee service from a cafe with regulars coming in for a morning newspaper read to an almost stand-up espresso bar. They have brought the product they are proud of to an area closer to the crowds, adjusting the concept accordingly.

The new espresso bar is here to serve a delicious coffee, fast, allowing a quick rotation of people. How do they aim to achieve it? They created a space that fits in more people to be served at once at a long solid bar. Actually, two bars. The first bar serves the customers, while the second is the espresso station and the kitchen in the back.

The marble bars are the main feature of the store and they are essential to its set up. Perhaps more than you would think. Their size may come as a surprise, but only until you realise there is not much left around in the cafe. The bars create a sleek and clean space, hiding fridges, shelves, cutlery, cups and anything else you usually find in a cafe. It is a massive difference from their first shop and the first thing you realise here. It is clean and organised.

The minimalistic interior is supported with the choice of coffee equipment. You would not know the second bar houses an espresso machine, looking at it from further away. Five Elephant are first in Berlin to be using Modbar machine, which is designed to have the body stripped down to a minimum, with water boiler hidden underneath the bar. Anything that usually stands between the barista and the customer, the big body of the machine, is gone. Modbar has got only three outputs coming above the bar, two espresso group heads and the steam wand. The machine is paired with a milk dispenser and two grinders: an Ekk43 for batch brews, Mahlkoenig Peak for espresso.

Additionally, the batch brews are served at two ends of the front bar, allowing the customer to grab a takeaway coffee and leave, or be served in-house.

Five Elephant changed also the way they serve food in their store. Their legendary cheesecake and other cakes come in single portions already from their Kreuzberg bakery, to ensure the cleanliness and the least hustle behind the counter. We still prefer to go for a cake to the other store though, especially for the cheesecake. Nothing can beat the smooth inner layer and the crust of the base of the cake.

Although the espresso bar is a rather thin small space, with high ceiling and little seating, packed with equipment and baristas, it feels minimalistic thanks to the beautiful design of the interior. The bars, made from Terrazzo marble, were designed by Sunst studio, who have a long working relationship with Five Elephant. They created their logo, and the most recent cooperation was on Five Elephant's new retail coffee bags.

The bars were measured to fit in precisely every piece of equipment, like a puzzle. The visible part is made from a beautiful stone that was measured, cut and laid piece by piece, and is held by a metal-wooden frame. It looks solid and simple, but in fact, it took several weeks to design and build it.

It definitely feels like a perfectly crafted shop, and the batch brew is always tasty.

The Barn opens a terrace cafe in West Berlin

The Barn has made the move from Mitte, where they operate two shops, to West Berlin. But why so far away from the hip and the most popular areas of Berlin? The Barn must have taken the opportunity and the challenge of entering an area previously almost untouched by speciality coffee, to serve good brews from where there used to be a very German cafe.

Café Kranzler is a local landmark that used to be one of the best-known coffee houses in Germany, going as far as 160 years back in history. But The Barn was not afraid of the challenge. The area of Kurfürstendamm turned into a modern, busy shopping centre, with the historical buildings housing fashion stores. One of them resides over two floors below Kranzler.

It is a little bit confusing, walking up the marble staircase from the Superdry store to the rooftop terrace cafe of Kranzler. It almost doesn’t fit here. But once you reach the top of the staircase, you walk straight to the middle of the round cafe.

Contrary to the complete change of outfits at Five Elephant, The Barn sticks with a familiar fit out of the store, using the principal round shape in it. Wooden stools and tables, low tables running along the windows, massive wooden bars and lack of any other design features. This face of The Barn remained almost unchanged. It is the location though that contributes massively to the cafe’s atmosphere.

Speciality Coffee Concoctions Made with Love and Devotion at Aroma Caffee, Bologna.

Firstly, it feels almost rewarding to reach the cafe after a rather long ride on the U-Bahn to the West and conquering the marble staircase. The 360-degree terrace is one of the key features of the cafe, and you can move along it as the Sun warms it during the day. There are only a few cafes in Berlin that get a long exposure to the Sun throughout the day, which makes Kranzler that more attractive.

Secondly, something has changed here and it takes a moment to realise. With their move to the West, The Barn changed their attitude to music. And it is for the best. Once the cafe got busier, the atmosphere was lively and filled the space with warmth. Empty, the cafe could feel a little bit like a gallery, and that is when the Jazz music hit the right spot.

The Barn has really taken advantage of the space that spread out onto a second, rooftop terrace. It is fitted out almost like a poolside terrace, with red and white, stripy deckchairs, matching the terrace awning—the main feature of this rooftop look.

All in all, the takeover of Kranzler is a nice combination of ‘familiar’ and ‘new’. With The Barn’s signature coffee cards and carafes of filter coffee, you get to enjoy the same menu as at their other shops, including the best carrot cake in Berlin. Where The Barn primes as well is the coffee machine. The under-counter Mavam is the first of its kind in Germany! Paired with two Mythos grinders and a V60 pour over station, you are in for a coffee treat.

Here, as well as at the roastery, you can shop for speciality coffee, chocolates, magazines and The Barn’s merchandise. They have a dedicated bar for it, that faces your hungry eyes right after you enter the cafe.

To sum it up, Kranzler is nestled in the middle of modern shops, located in the building of a post-WWII icon of West Berlin and sits within the space of a Japanese fashion brand. This is already a huge load of novelties for The Barn, as well as it is for the locals. There is a great number of people that will be discovering The Barn here, and many people will cross the city to see where did they innovate. They certainly will find a sunny seat and the much-welcomed break from the street hustle, here.

Stepping out of the comfort zones

Both roasteries have taken on the challenges of new concepts, new areas and new equipment really well. It is good to see them step out of their comfort zones. No matter how confident their moves may seem, it is always a risk to start something different and new, with so much time, effort, as well as money invested in it. The Barn and Five Elephant seem to have understood that the Berlin coffee scene is on such a rise, they cannot rely on their previous success to last forever.

They need to go with the new age instead, keeping up with the flow of the coffee scene. Although it is too early to judge any achievements or numbers at their new spaces, both of the cafes have already gathered great feedback, threw parties, latte art throwdowns, and attracted a good number of people. Come pay them a visit if you are in Berlin!