What Really Happened at CoLab:Prague?

Stephen Leighton commented on his Instagram: “Shit just got real,” when he published the official poster for CoLab:Prague and we agree that the event is a real deal (and will be even more so in the future). CoLab:Prague (21 – 23 May 2015) was a 3 day event organised by Barista Guild of Europe in the collaboration with Tamper Tantrum and local Coffee Embassy. A full day of educational content with 2 half days on either side to discover the host city's coffee culture was a good excuse for coffee professionals from around the Europe to visit the capital of the Czech Republic. 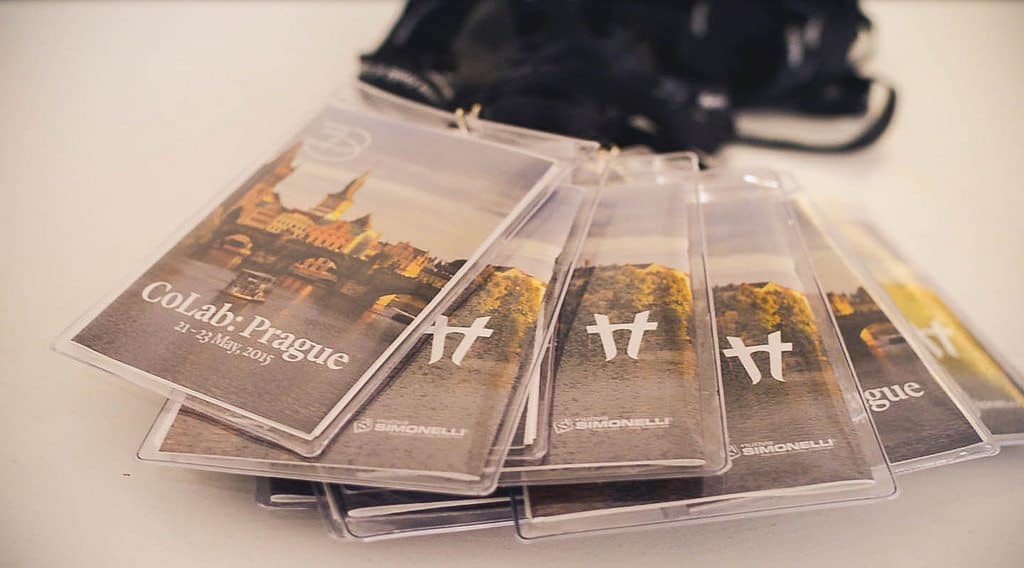 European Coffee Trip spent the whole event with all the speakers, organisers and participants so you can enjoy this report.

On our way to Prague we already saw people sharing pictures from Prague’s cafés and we were excited to meet these people in person. The meeting point was set to be in Cafe Jedna, in the Holešovice district, and coming closer we were starting to recognise familiar faces. Brian W. Jones, author of the popular coffee blog DCILY and co-owner at Supersonic Coffee, was chatting outside of the building. Isa Verschraegen, coordinator of BGE was welcoming and registering the coming people and Kalle Freese, owner of Freese Coffee Co. and the current Finnish Barista Champion was greeting all the baristas in between. 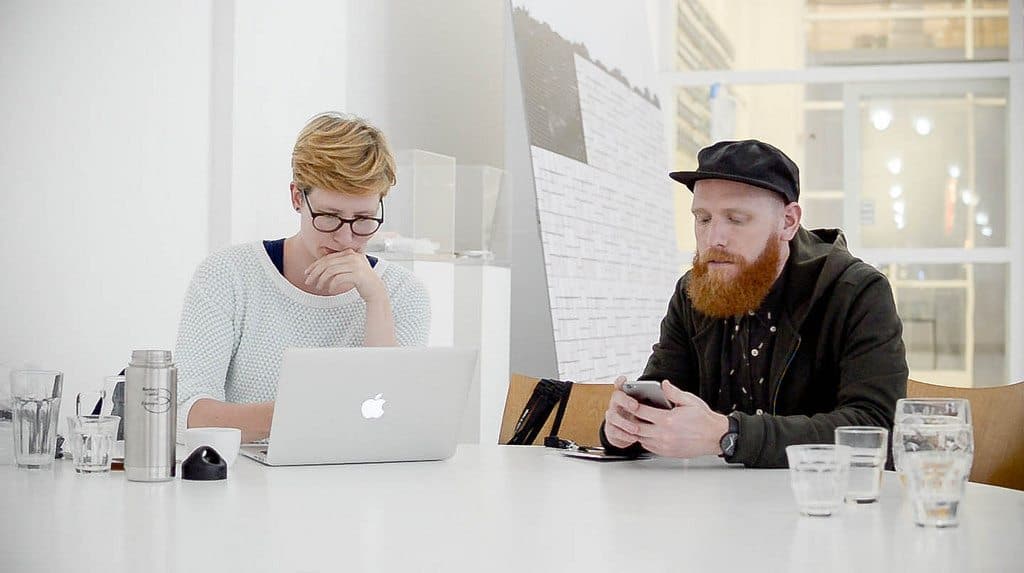 Let’s take a coffee (or beer) and join the boat trip – that was the plan for the evening. This one is funny because even most local people (including me and Radek) have never done a boat trip on the Vltava river. Even though it was a Kalle’s second visit of Prague he was up for being our tourist guide. 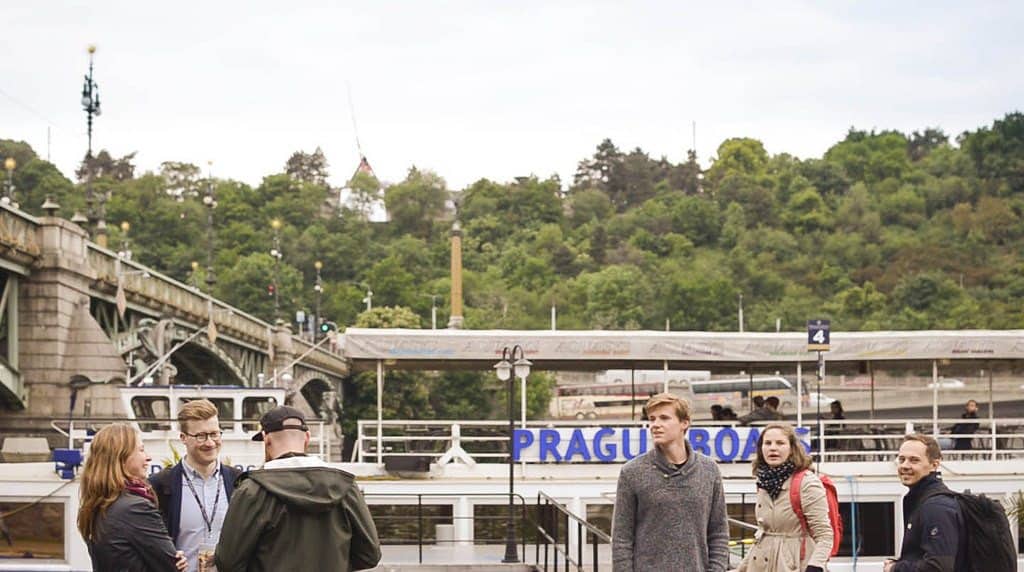 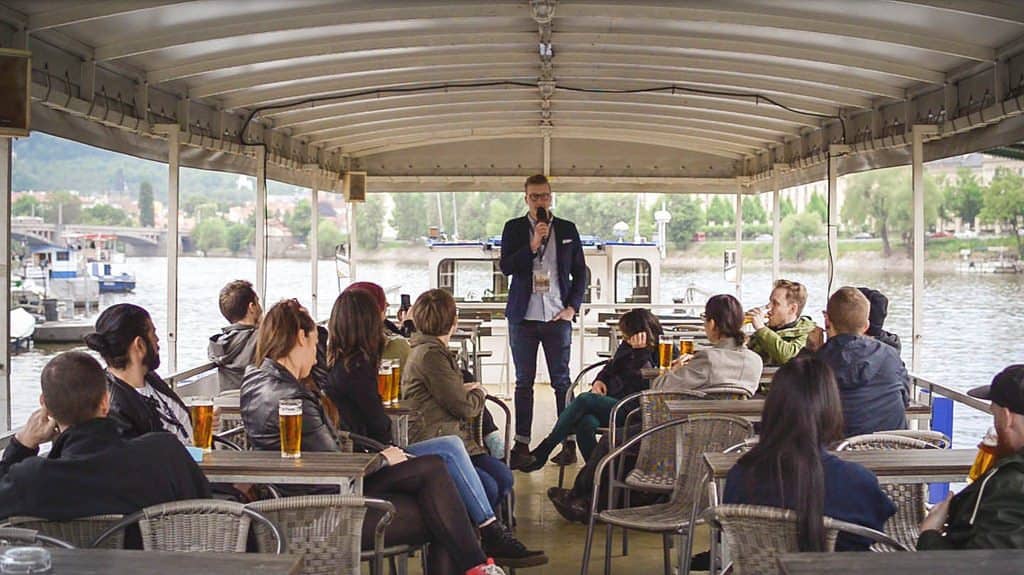 The lecture day took place in the National Technical Library and as most of participants couldn’t start a day without proper coffee, baristas were serving Doubleshot’s seasonal blend called Tam Dem (60% Colombia El Meridiano, 40% Ethiopia Yirgacheffe Wote) on the espresso bar and Colombia Carlos Imbachi and Ethiopia Yirgacheffe Wote on the brew bar. Having Nuova Simonelli as a golden sponsor for the event you shouldn’t expect anything less than VA388 Black Eagle Gravitech for your espresso. 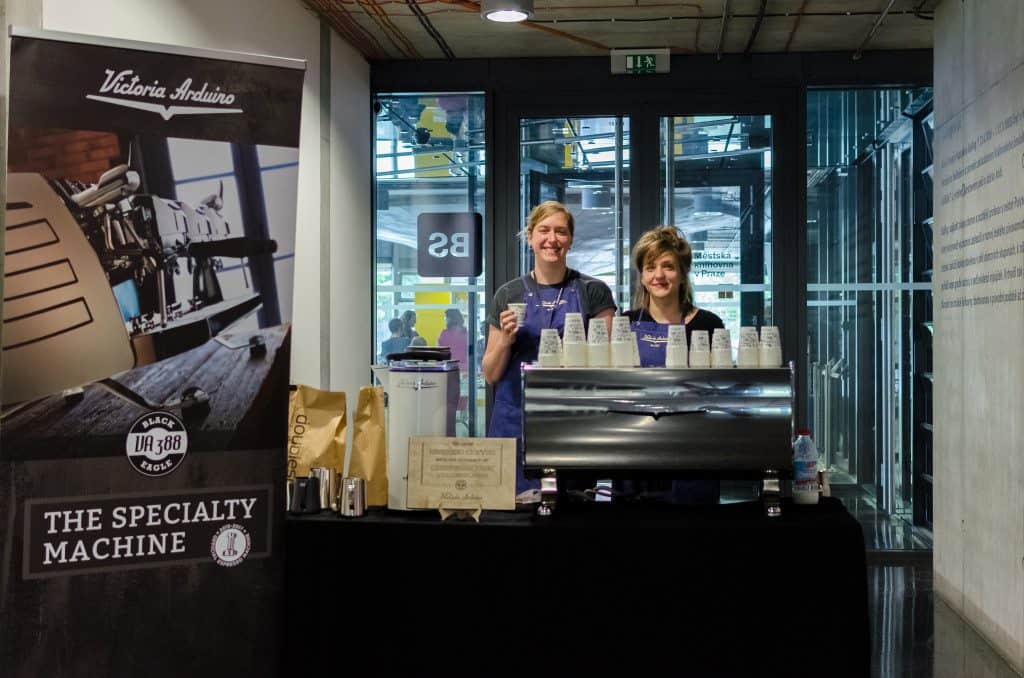 “This is the most geekier Tamper Tantrum we have ever had,” starts Stephen Leighton his welcoming ceremony. If you haven’t heard about Tamper Tantrum before, it is a platform dedicated to broadcasting incredible stories from the coffee industry founded by Stephen Leighton and Colin Harmon in 2009. Colin couldn’t make it to Prague this time so Kalle Freese put on the challenge of co-hosting the whole event.

The first speaker, Chahan Yeretzian, came from the University of Zurich to talk about “Science and Art of Coffee”. His team includes Gloria Pedroza, Phillip Meier, Andre Strittmatter and Marco Wellinger and together they tackled several tough questions in the coffee world – how does water and freshness of roasted coffee affects the final brew and what aromas are really extracted. One of the many interesting points in the presentation was that even thought there is over 1000 volatile compounds in coffee (as it is often referred to) only 25 – 30 of them has a recognisable flavor influence.

Erna Rosberg from Münster’s roestbar took the mic as a second. Erna is the World Barista Championship 2014 semi-finalist and in her talk she asked the question “Do we need barista competitions?”. She observed the world of the competitions from her perspective of barista, trainer as well as competitor which gives her the unique position to argue in both ways. If you would ask her today, she would be still in for the competitions as it develops the barista in herself and the team around her. Any advice for the future? We should accept the rules of the game we want play (as baristas) and perhaps get the inspiration from the other industries like bar keeping (as an industry). 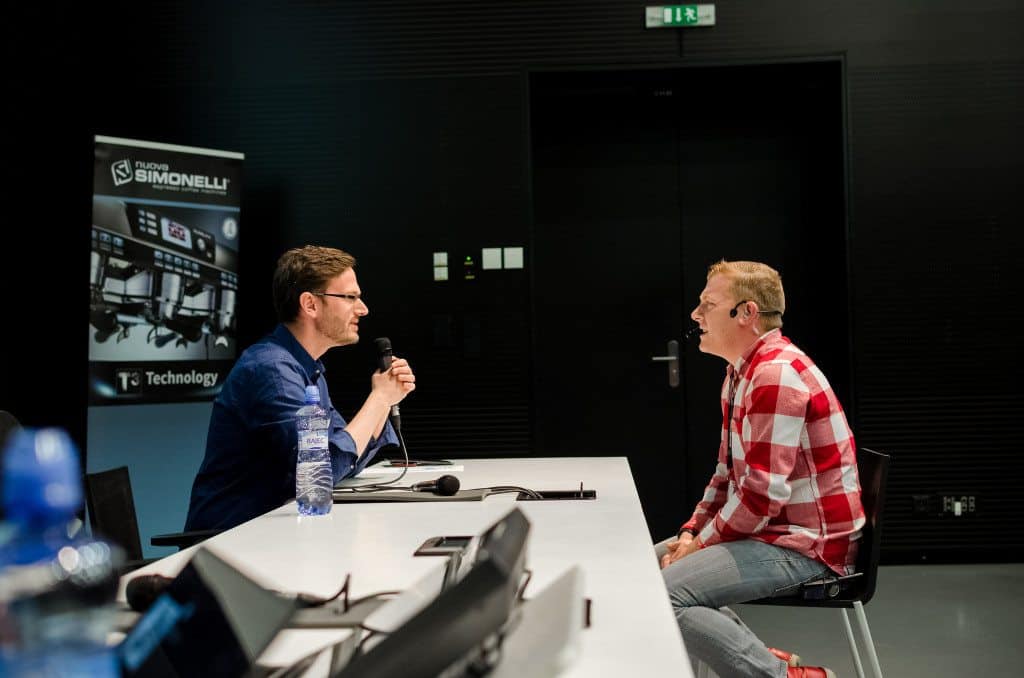 Tibor Varady is the owner of Espresso Embassy, the well known café in Budapest, and the finalist from the World Brewers Cup 2012. Tibor worked as an environmental lawyer before he jumped into the coffee world and in his talk he discussed the cafés hiring process. His goal was to prepare wanna-be baristas for the task of landing a job in a good café. First thing is to realise what kind of job it is: “most people who are not in hospitality don’t realise how hard work it actually is.” His track record with hiring is pretty good as 7 out of 10 baristas still work with him but he is not naive and understand that there is an advantage of the small coffee scene – there is not that many other places to leave. Even Stephen was trying to get a job in Espresso Embassy but he didn’t succeed due to the lack of Hungarian language experience. 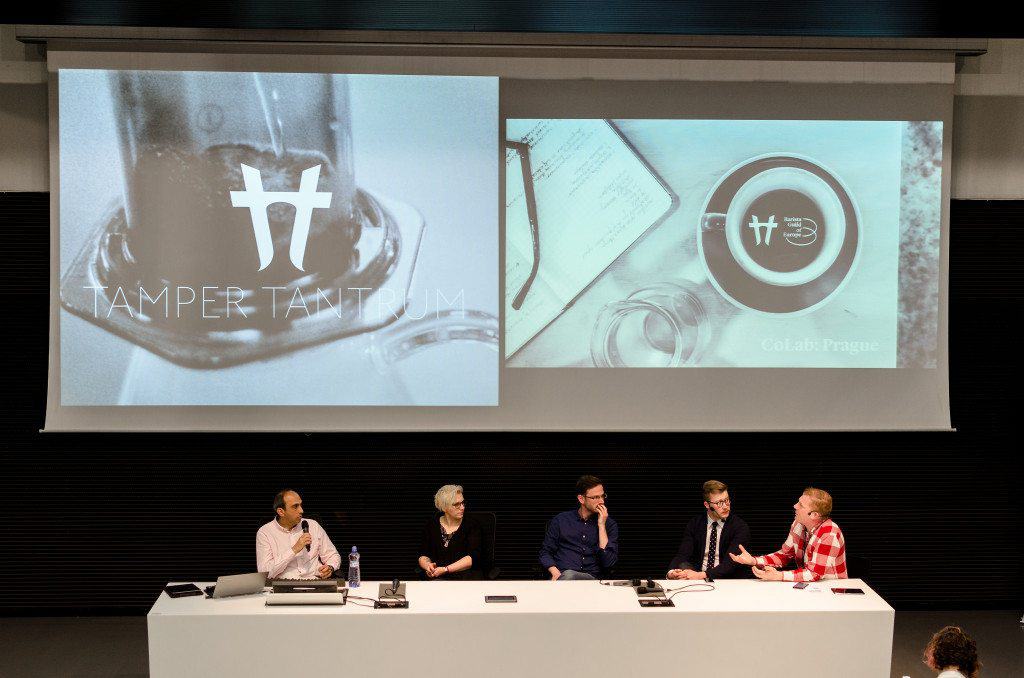 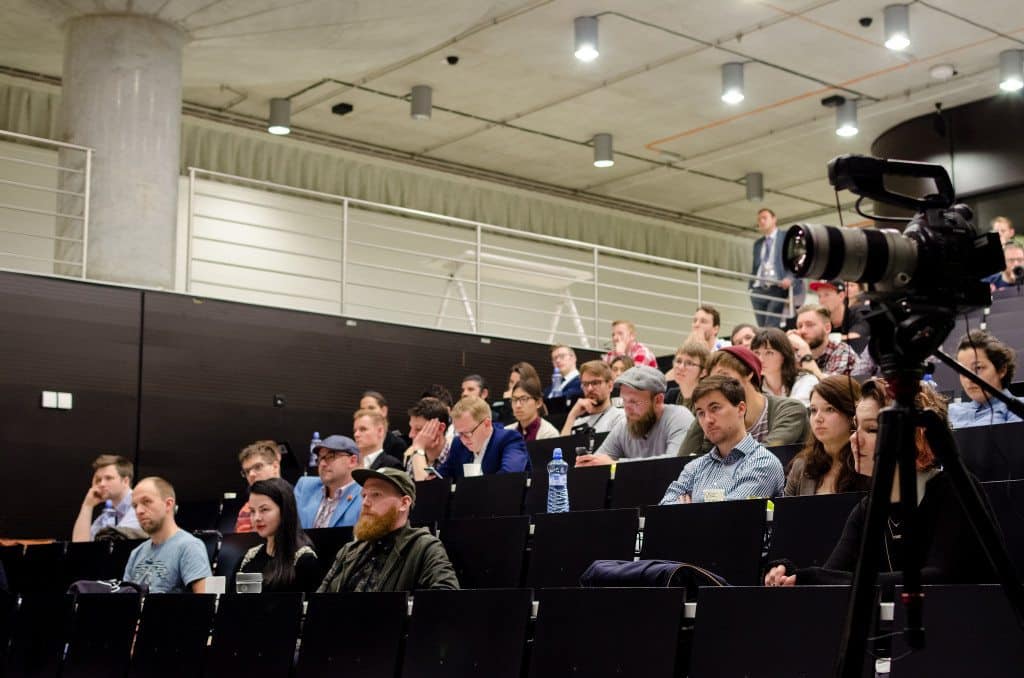 After the lunch break, Zuzka Cerna, the Czech Cup Tasters champion, arranged the “Taste of Prague” cupping where all the participants get a chance to taste what not only Prague’s roasters but also the rest of the Czech Republic has to offer. Luca Pompei Brancaleoni started the afternoon session with the brief introduction of the both Nuova Simonelli and Victoria Arduino and their position on the speciality coffee market. He stressed out how the company supports the European barista community and their goal to continue doing so. CoLab in Antwerp, city of many treasures

Adam Neubauer, the 2015 Czech Barista Champion who made it to the semi-final of the World Barista Championship in Seattle, decided to focus his talk on the psychology and its practical application for the barista’s skills development and the customer experience. He talked about his experience from switching between the café serving 200 cups a day to the café serving 600 and what challenges did it bring. Still, the customer should be in the centre of what we do behind the bar because as Adam said: “there would be no coffee without customers.”

Joanna Alm, head roaster and green coffee buyer at Drop Coffee, Stockholm, dedicated her talk to espresso with the argument that we should let the origin to speak for itself. Drop Coffee is known for stressing out the importance of the raw material and not roasting the coffee for the brewing method but rather for coffee itself. She argues that even though we may be doing well with filter coffee, “in espresso we still don’t do a good job in shining coffee through it.” In general, Joanna thinks “we should be braver with espresso drinks” and she pointed out that even during the event we are firstly asked about the brewing method we want rather than coffee (and it taste notes) we prefer. 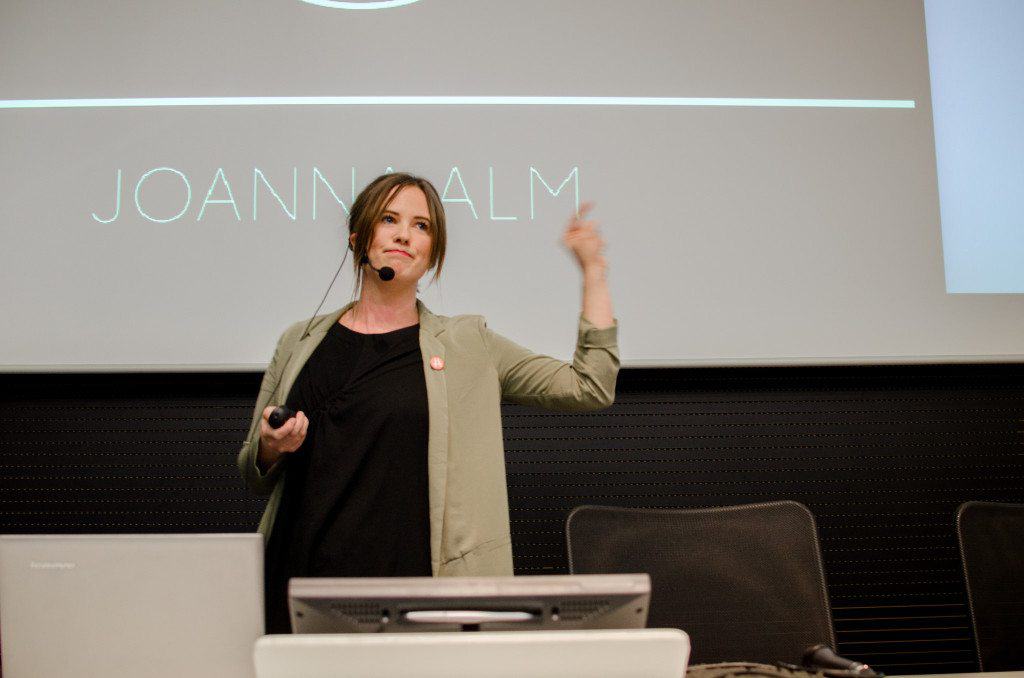 Christopher Hendon, a scientist from the University of Bath who is known in the coffee community through his research on water with Maxwell Colonna-Dashwood, surprised us by the talk about grinding (their new topic) rather than water. I have to say that if every science / engineering lecture would be as entertaining as this one, I wouldn't be skipping most of them at the University. Christopher brought more questions than answers in the presentation titled “A Taste of Physics” but it’s easy to excuse him. He shared the brasil-nut effect that is still and how “vibrating” portafilters could lead to better coffee distribution in the basket. He plans to continue the collaboration with the coffee industry even at his new university – Massachusetts Institute of Technology. 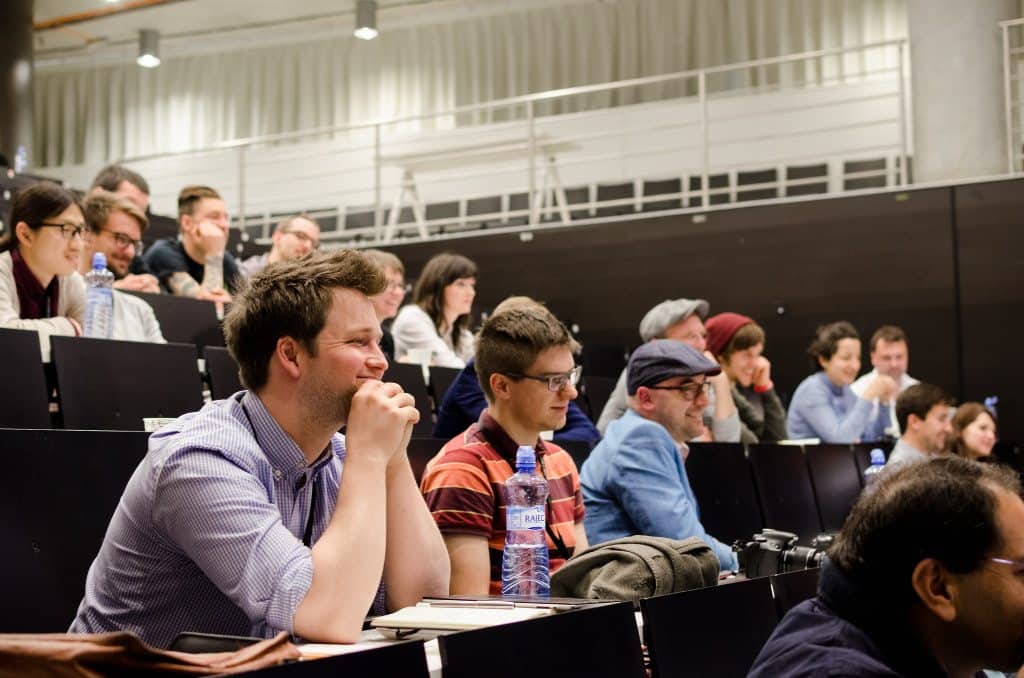 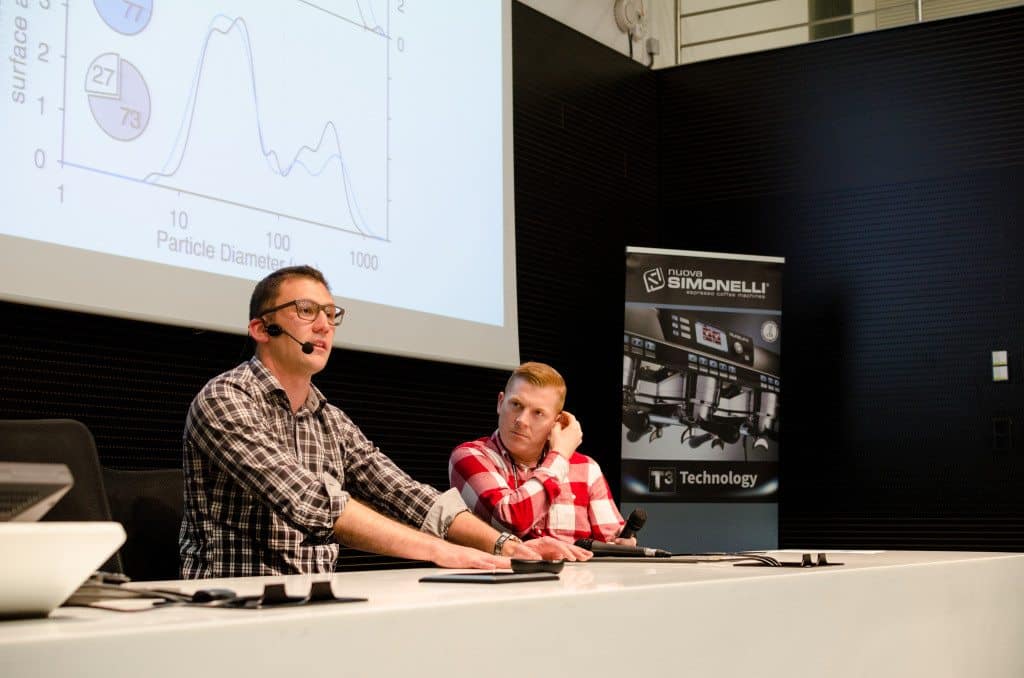 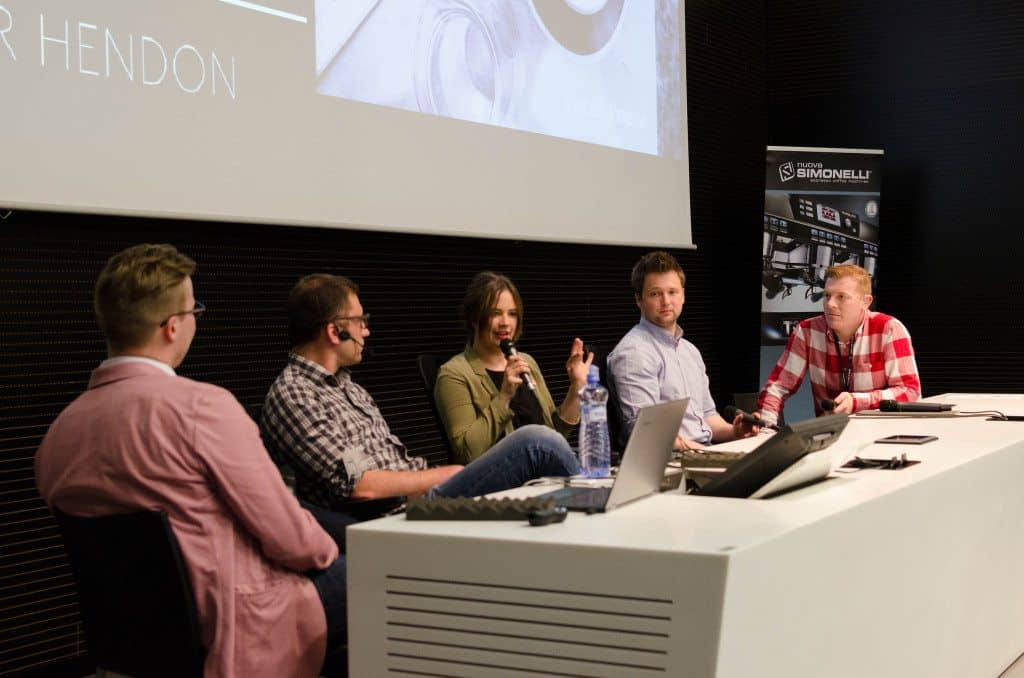 All the participants could discuss freshly absorbed information among each other during the after-party at Café Jedna. It was more about beer and less about coffee on the bar but in the same time it’s an environment where baristas are used to interact and where all the ideas can flourish.

Saturday morning was the last day of the event and except of saying good bye at EMA Espresso Bar one could choose from three unusual Prague’s tours and talking with Wojtek Bialczak from The Barn, Berlin who took the Street Art Tour we realised there is still so much to discover in our own country. Coffee people were still up for the last chat before kicking off their personal Prague’s coffee tour and that’s what the event was meant for – meeting new people and discovering the coffee culture of the hosting city. “Baristas don’t meet everyday, they are usually working in the shops,” commented Elena Ivanova Minekova, blogger and barista from Zurich, on the importance of such events.

Later this year, BGE will be visiting Paris for its second CoLab and we hope that European Coffee Trip will be reporting from the event too.

NOTE: Check the complete photo gallery on our Facebook.