5 Reasons to Serve Nitro Coffee at Your Cafe

Do you know what nitro coffee really is? Summer is quickly approaching and it is obvious that cold coffee, be it in a form of filter on ice, cold brew or nitro coffee will be on the menu of most speciality coffee shops. To really understand the concept we traveled to Berlin where we met Marian Plajdicko and Roland Lodr of Happy Baristas.

What is the easiest way to explain nitro coffee to a customer? “Simply put, we do cold brew coffee which is charged with nitrogen and served on a tap like a beer,” explains Marian. Nitrogen gives the coffee this really creamy mouthfeel and it gives it also a white foamy head, like a Guinness beer. At Happy Baristas, they wanted to “give the effect of a coffee with milk, but without having milk in it,” explained their intentions Roland. It is indeed a simple black coffee—no milk, no sugar, vegan-friendly.

If you are in doubts whether you should serve nitro coffee at your coffee shop or not, check the list of benefits we discovered talking to Roland and Marian.

It can’t get easier! “Barista literally needs to pull the tap down and his drink is finished. He can serve his drink,” points out Roland. The preparation of nitro coffee is another story, but that can be done off the hours and eventually off the site. It is not something barista would do while customers are waiting for their coffee.

Nitro Coffee is a profitable drink. “It is important in this time of our industry where our margins are under pressure,” emphasizes Roland. Coffee is brewed in big batches so you are getting the economy of scale in the coffee shop environment.

3 – Saving the space and environment

We have seen cafes of all kinds. Large as well as tiny. Something they have in common is that they don’t want to waste their precious space. “It saves a lot of space. You don’t need bottles in fridges. You only have taps on the top of your counter. And that’s it,” says Marian. 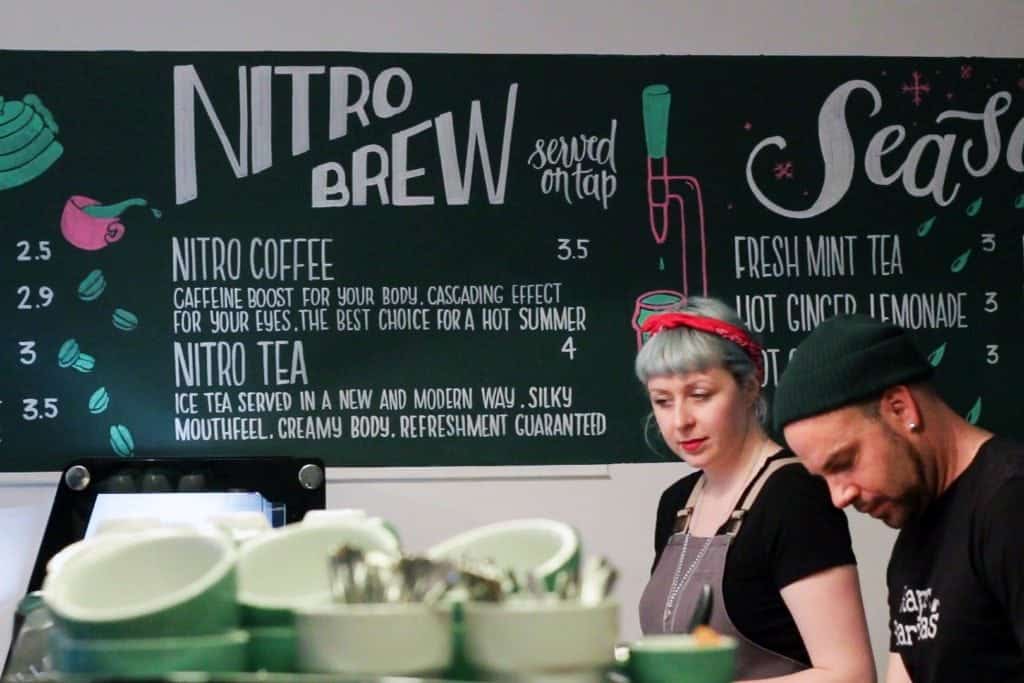 4 – Vegan-friendly alternative to coffee with milk

Unlike coffee cocktails that are based on espresso, filter coffee in a form of nitro coffee is not that powerful so you don’t need that many and those strong counterparts to balance the drink. Coffee is one of the ingredients you can use and quickly access through the tap.