Girls Who Grind Put Women in Coffee Front and Center

Girls Who Grind is a name that speaks clearly for not only who runs the business, but also for those it represents. This roastery, established in 2017 is all about female empowerment while promoting female coffee producers and those that work hard to support them. We spoke with the ladies that are behind the all-female roasting project to understand their efforts better.

Fi O’Brien and Casey Lalonde are the owners of Girls Who Grind, a coffee roastery based in Wiltshire, South-West England. Although they both live in England now, each of the ladies come from a different background, as well as a different country.

Fi O’Brien had worked as a creative strategist in Melbourne, Australia, before moving to the UK. Coffee has always been present in her life. Fi even opened her own cafe in Melbourne, but in 2006, she moved to the UK where she continued working in design while managing cafes along the way.

Casey Lalonde, originally from the upstate New York, USA, had worked her first coffee job at a Vermont-based coffee roastery, sorting out samples, analysing beans and running loads of tests. Eventually, she got into roasting, too, and this is where her passion for coffee was ignited. Since she has always lived outside big cities, you would not meet her sitting around at cafes much, but she has always been passionate about the social side of coffee production.

The two met in Frome, the UK, where they moved with their families. What connected them was their love for coffee, but also their realisation of the challenges that there are for women in the coffee industry. They agreed that it is not simple to be a woman—or mother, like themselves—and run a successful career or a business in the industry. It did not take long before they started scheming and planning. They began looking for options to change these obstacles, they began working towards a change in the industry.

The name has always been a play on word that Fi appreciated and had always wanted to put to use, celebrating the women working in the industry, so when the idea of opening their own business came about, it fit perfectly. 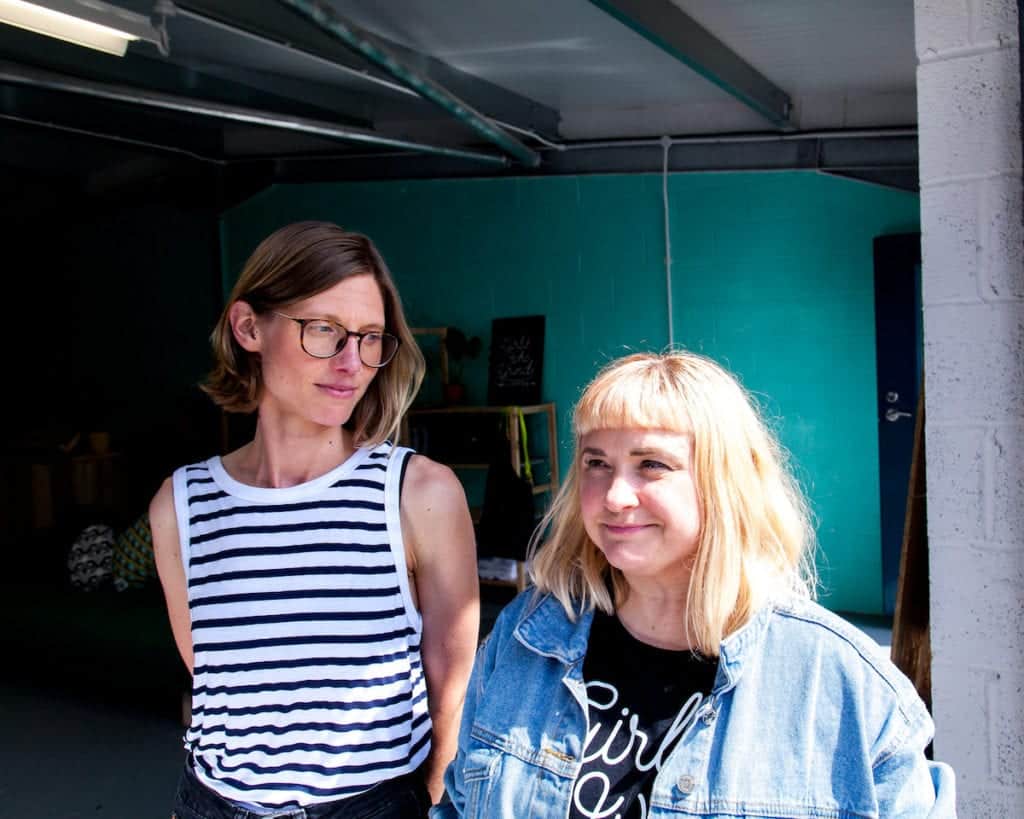 In the year that followed, the lady bosses experienced an incredible learning curve. Since day one, Casey and Fi were the only employees, taking care of everything from roasting to dispatching of orders and running their social media. Thanks to their combined skills and experience coming from different backgrounds, they split the roles evenly. Fi takes care of the brand identity, making sure that the message of the company is delivered in the most digestible way. Together with her husband, they worked on the packaging design and the way that the coffees’ stories are delivered to their customers. She runs Girls Who Grind’s social media and takes care of deliveries.

Casey is the person making sure that your coffees taste their best. She sample roasts all the coffees they source on their IKAWA sample roaster, selects the best roast profiles and then tests and tweaks them as she progresses. She roasts their coffees in three to five kg batches and follows the profiles usin Cropster software. 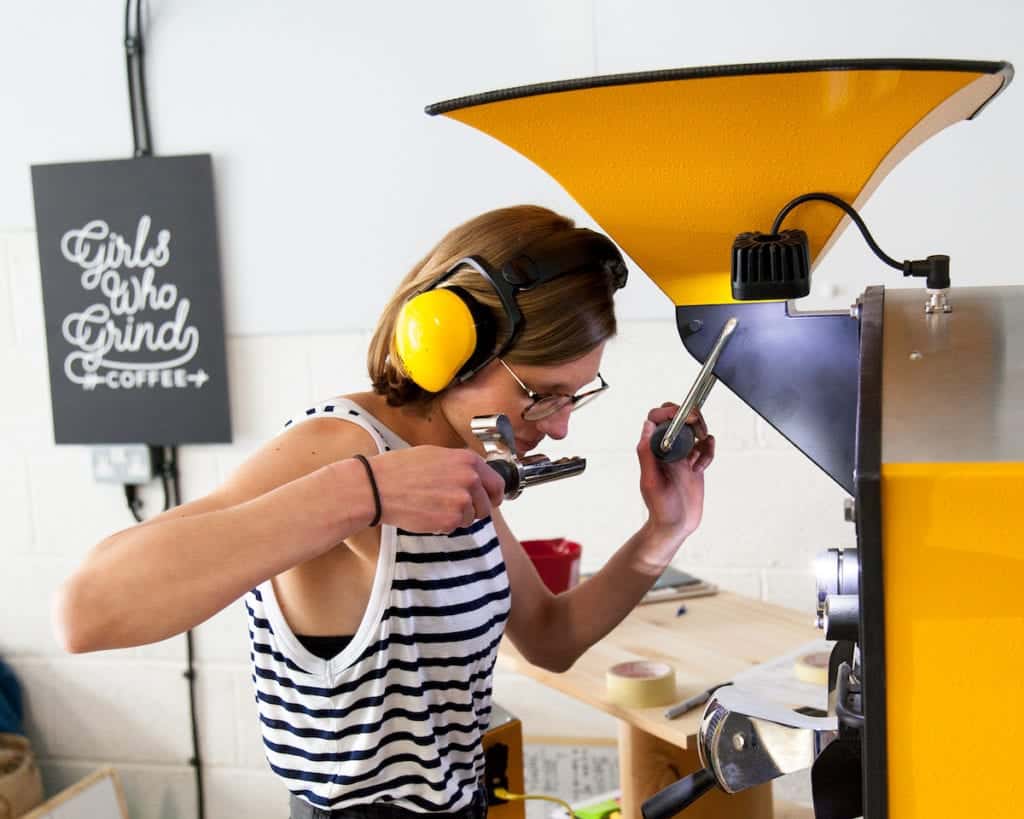 Splitting the roles this way, they managed to run their show on their own until very recently, when they employed another person to help out with packaging and labelling.

Speaking to Fi and Casey, we learned that female producers have always been their main interest. Both ladies wanted to represent female producers and show that they can produce wonderful coffees, too. But they did not meet very much support at first. A general reaction to their strategy was rather doubtful, they were told that it was not going to be possible to buy only female-produced coffees.

A year into their roasting adventure, they receive high-quality samples from all around the world, even sent by the producers themselves. Selecting just a few for their roastery is never easy! Since the beginning, they have worked together with green coffee importers who support women producers. A great example of a female-run farm is their most recent coffee which they sourced directly from the farmers. Fi and Casey call it their ‘Sisterhood’ coffee. It was produced in El Salvador at Finca San Antonio Amatepec by Boza sisters, who are 3rd generation farmers. Carla Boza is in her 20s and was the person actively searching for small roasters who would be a fitting candidate for San Antonio’s coffees. She contacted Girls Who Grind via social media and sent them samples. They loved them and thus their first directly sourced coffee was born.

The ladies stressed that it would not have been possible without the great help of Caravella though, who helped them bring the coffee from El Salvador to London.

The first ever coffee that Girls Who Grind bought was launched at Coppafeel, a breast cancer awareness charity event in London. It was a Guatemalan coffee from the Huehuetenango region, produced by the ladies at The Asdecafe Cooperative. They served and sold it at the event, contributing a part of their sales to the charity. 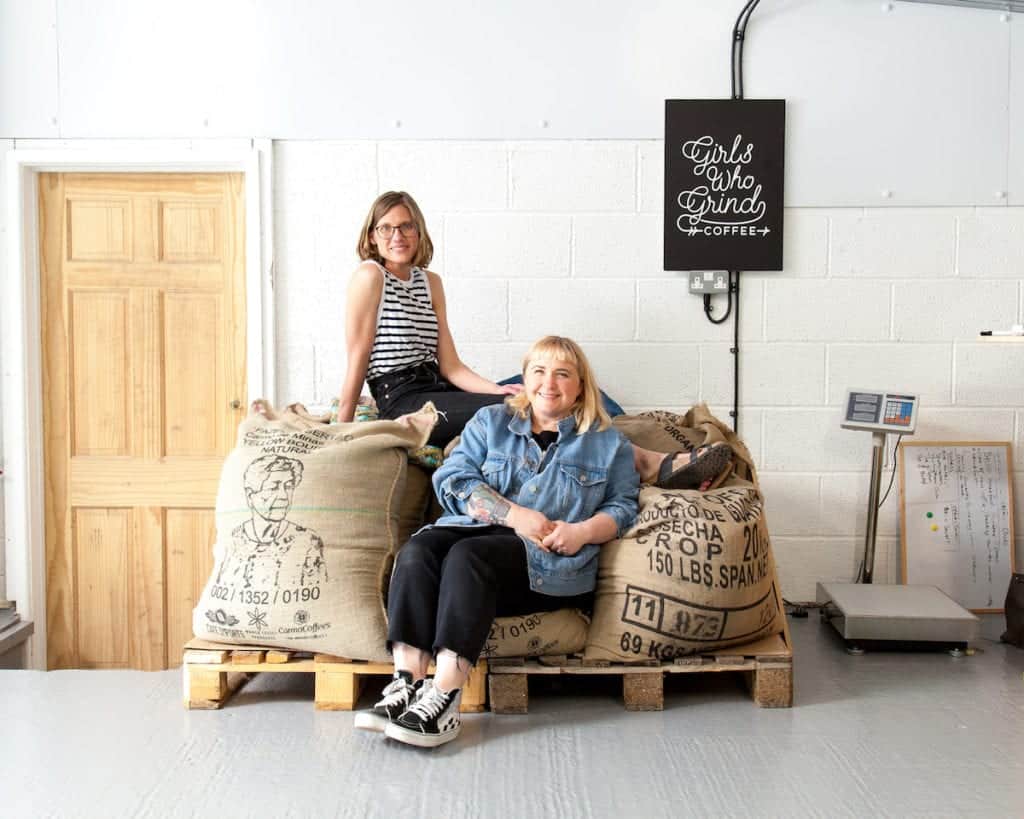 Fi and Casey both agreed that it was a great way of showing their gratefulness to the charity for having them, as well as supporting a good cause, and in the future, they may consider more charity events and collaborations. For the moment, they focus on running their business sustainably though. Nevertheless, they remain active in promoting female power in the industry, for example by attending the International Coffee Organisation’s annual meetings where they try to spread the word about their efforts and their producing partners.

A shift in the way that we perceive speciality coffee

Casey and Fi shared what they thought to be the current state of speciality coffee. It seems that the understanding of speciality coffee by the end consumer is definitely changing. Although for Casey, it still has a lot to do with what happens at the farm level, what the story behind each coffee is. There is a growing interest on the customer side, too, the ladies believe that they do not want to see only a picture of the farmer on their coffee bag.

Casey understands speciality coffee to be “…about long-term relationships that are mutually beneficial, rather than benefiting off of their [producers’] backs.” But the duo agreed that the customer is now more than ever interested in transparency. There is a shift in the way that customers consume speciality coffees. They have become more aware of the variety of coffees, processing methods and the cup profiles that can be achieved this way. Their taste has been developing and so they get excited about new coffees on offer. 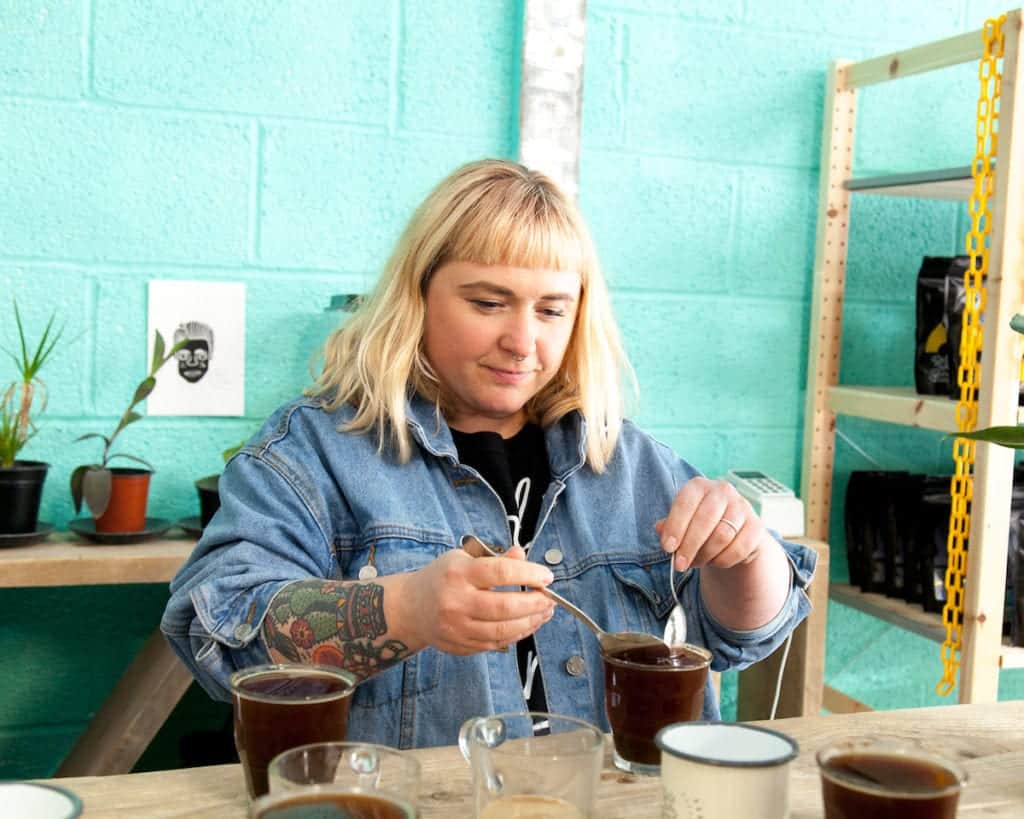 Girls Who Grind are trying to achieve a chain of relationships in which the customers become aware of the positive contribution they have by buying certain coffees from farmers around the world. They want the customer to know who they support, who produced their coffee and where their money goes from each purchase. In a way, they see this as a circle closing, since the farmers can continue growing their coffees, and the customer, in return, will continue to drink their quality product. “Everyone gets what they want,” Casey and Fi said.

The brand identity to represent the spirit of the female producers

Girls Who Grind’s coffee bags are a strong communication point for the roasters and were designed in order to clearly state who the roasters represent.

Each bag has an illustration of a woman on its front, designed in varied colours. These illustrations, although they display a painted face, represent the spirit and the essence of the women who produced this coffee, rather than the coffee itself. Fi told us: “It is also out of respect, really, that we do not want to stick any photos of farmers on our bags or social media. The illustrations rather portray the strong, colourful, powerful women who produced our coffees.” 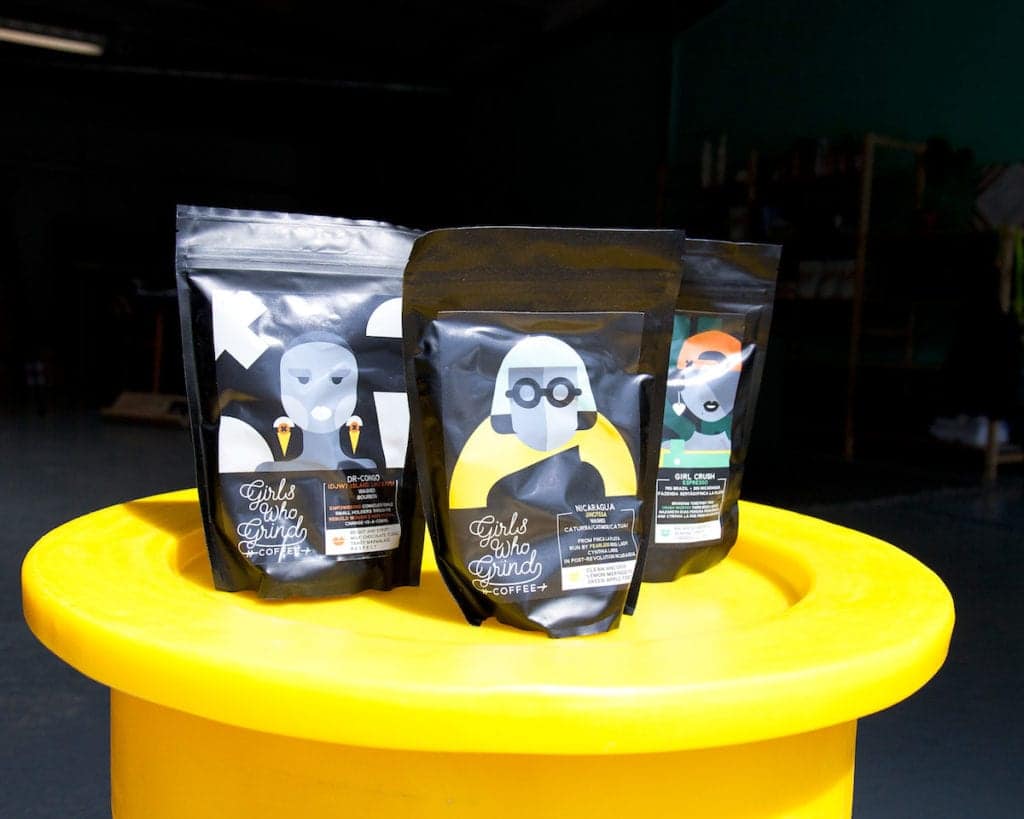 The bag labels also state the tasting notes of each of the coffee and the name of the producer or the cooperative. We learn how the coffee was processed and what variety it is.

An industrial unit run by women

The roastery where the magic happens is located in an industrial unit in Frome, and it is literally one big room that fits everything to run a successful production: The roasting machine—an orange-yellow Giesen, their IKAWA sample roaster, a packing station, and a La Marzocco espresso machine. The IKAWA was the first piece of equipment that the ladies bought for the roastery, and Casey was thrilled with how portable it is. “It is wonderful to have the IKAWA at the house, roasting samples at home makes the house smell so good!” 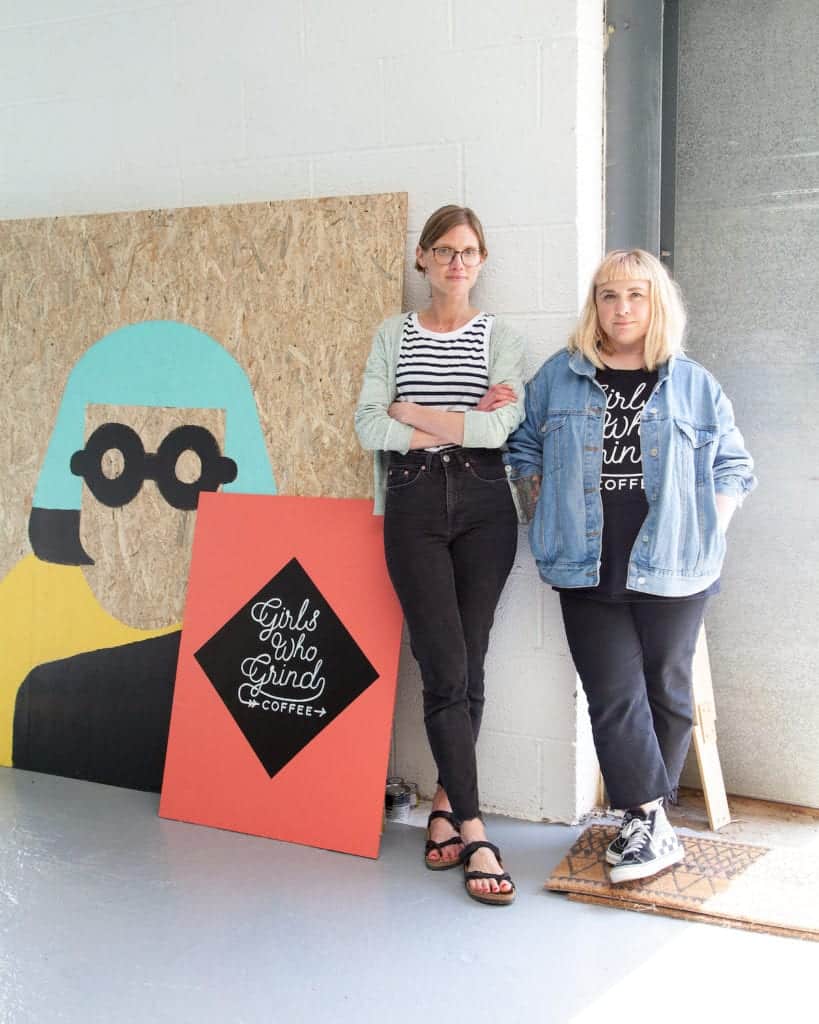 The roastery is full of their current coffees, waiting to be roasted. It is a great selection of coffees from Guatemala, El Salvador, Brasil, Honduras, Nicaragua, but also Kenya and Rwanda. Casey also roasts two decaf options, one from DR Congo and the other from Ethiopia.

The least expected is perhaps the Thailandese Doi Pangkhon Microlot, which is grown by Pupae Becheku, an entrepreneur and a linguist, and her brother, farmer Ata Becheku. Casey stressed that buying micro-lot coffees is actually a great advantage for both sides. Since the small farmers produce only a limited amount of coffees on their small lands, they cannot sell it to big green coffee exporters, but they can sell it to micro-roasters, such as Girls Who Grind, who are able to buy it and then sell it to their customers without going bankrupt, yet, still supporting the producers.

A dream which is yet to be fulfilled

Talking to Fi and Casey, I was really thrilled to listen to their determined voices, committed to promoting change in the industry towards a more female-inclusive environment. The two ladies are incredibly positive, down-to-earth and hard-working coffee professionals. They are doing what they love with their best intentions in mind.
The future holds loads of unknowns, but Fi and Casey have big dreams, or shall we say big plans, ready for their roastery.

On Producing Coffee in Tanzania with Jan E. Bolte

Can't go past a Kenyan.

Have you ever had a fire in the roastery or any other incident?

Nope, we have the opposite problem of freezing our butts off at our Unit right now!

Who are your mentors? What inspires you?

We are completely inspired by the women that surround us in the industry. The female producers that achieve so much against all odds. Badass women running their own business, giving voice to other women in the meantime.

Do you aim to satisfy a taste preference of your customers or yours?

We want to do the coffee justice by roasting it in a way that brings our all it has to offer, we listen to the coffee!

What is the word that describes what you're trying to accomplish in roasting coffee?

Your favourite IKAWA profile?
For new coffees, we like using Tim Wendelboe’s standard profile and make adjustments as I go.

All photos are courtesy of James Arthur Allen. All were licensed for the story.