Have you tried almond milk in your coffee? If you have, you’d probably agree it could have tasted better. Now it can, thanks to Alpro’s new almond milk for professionals. Forget the almond milk that doesn’t allow you to properly steam foam or simply doesn’t taste well with your coffee.

Merijn Gijsbers, the head barista of the project, took us behind the scenes to get a look at the process of how the product came to be. Merijn has ten years of experience in the industry, which brought him the title of the Dutch Barista champion 2017.

The demand for the plant-based drink is rising every year. More and more people all over the world are experimenting with healthier options and diets with fewer animal products. And this trend is impacting the coffee world as well.

“We saw that almond milk was getting more and more popular. But it was difficult to make foam with the regular kind and sometimes it did not taste well with coffee,” Merijn explained where the need for better almond milk came from. Coming up with the new perfect formula was not easy but, as Merijn said, they managed to introduce one of the best—if not the best— plant based milks on the market. How did they do it?

The taste of the almonds is important

“We wanted to focus on two things. First, it had to be low in sugar, and second, it should only be pure almonds—no soy!” Merijn described. Then the process began. “We knew the product shouldn’t be too ‘almondy’ because it wouldn’t go well with the coffee. On the other hand, the taste of the almonds was important too, it should be present. It would be strange to produce almond milk that tastes like cow milk,” Merijn explained what was according to him the hardest part.

There were several things the team had to keep in mind during the whole process. “Well obviously, you want the taste to be good and match the coffee. But as you know, taste is a very subjective thing. However, we have our target group so we focused on the outcome that they will like. We knew what their preferences are, considering the sweetness, the texture of the coffee or the flavours they are looking for,” Merijn specified.

The taste was not everything. They had to focus on the technical aspect as well. Because regular types of almond milk do not foam well, this was the part they had to master. “We wanted it to create a nice microfoam and enable the barista to produce latte art. And also, to let the foam stay and not decompose again,” Merijn added.

The process was long and challenging. It took them two years to come up with the final product. But it was worth it. The journey towards the almond milk for professionals was so long because the whole team simply wanted to come up with the best product possible.

“During the very long time, we were sending the samples back and forth between RnD and me. I gave them feedback and sent it back, they sent new samples and again and again. Until we found something that we liked,” Merijn revealed the important steps they had to take. Sometimes the milk was too sweet or not sweet enough, other times it matched dark-roasted coffee but didn’t go well with the light-roasted one, and so on.

“I could do all testing from home”

Merijn was not the only barista on the project. It was important that the product was tested by many baristas to reach real perfection. Sometimes they tested the almond milk in the factory but, as Merijn said, he could do all testing from home: “I have all the necessary equipment I need. I’m not the one composing the drinks, I’m just testing them so I can easily do it at home.”

As Merijn had already worked with almond milk before, he knew what it was missing. “There is a big difference between the regular almond milk and the one Alpro developed for professionals. Sometimes even the roast profile of the almonds decides the quality of the product. It needs to be a little bit roasty to combine well with the coffee,” he explains.

Sustainable product thanks to European almonds

The almonds are sourced from Europe, specifically from an area near Barcelona, as the company’s aim was to make the product as sustainable as possible. “We take the almonds from very small farmers, small trees, with respect to the environment. Of course, almonds need a lot of water but the good thing is in Europe 90% of the water intake comes from rainfall,” Merijn described.

After they came up with a satisfying product, the shelf life testing started. As the name reveals, the aim was to determine the use by or best before dates for the product. This step was very important in order to meet strict regulations and to keep the performance of the product for baristas.

Waiting was the hardest part

What was the hardest thing about the process? For Merijn, it was the waiting. “Once you are excited about a product, you can’t wait to introduce it to people and you want to do it as soon as possible. But for Alpro, it was very important not to launch anything until it had a certain standard. So we were waiting until the shelf life period ended. Then we could finally show what we came up with,” Merijn explains.

Waiting was not the only thing that made the process challenging. Merijn said that it was quite hard to find a flavour profile that would match his personal preferences and those of the target audience. “I always think from the barista’s point of view, but I shouldn’t forget what our focus group likes as well. It’s important to find the perfect point where both me as the barista and the consumer like the product.” 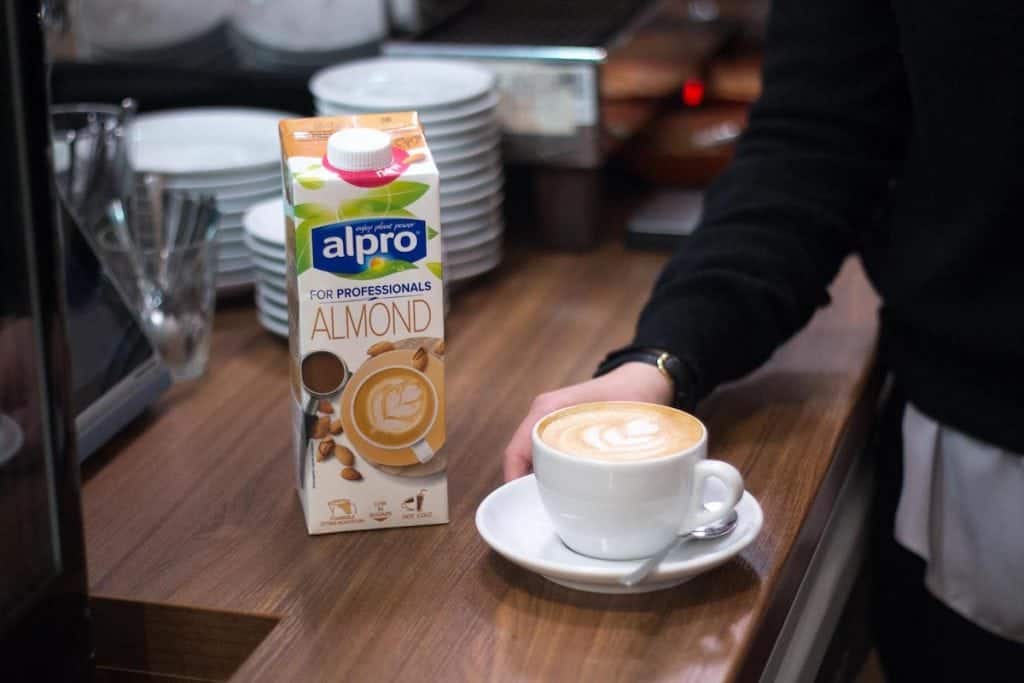 Merijn enjoyed working on the product and said he liked that they were being challenged all the time. “Every time something didn’t work we were looking for solutions with RnD. Until we came up with the perfect formula.”

It’s non-dairy, delicious, high in protein, low in calories and sugar, paleo-friendly and suitable for vegans. No surprise almond milk is such a hit. Thanks to the effort of the Alpro team you can now enjoy your almond latte the way you’ve always wanted. Tasty, easy to make and with delicious microfoam.