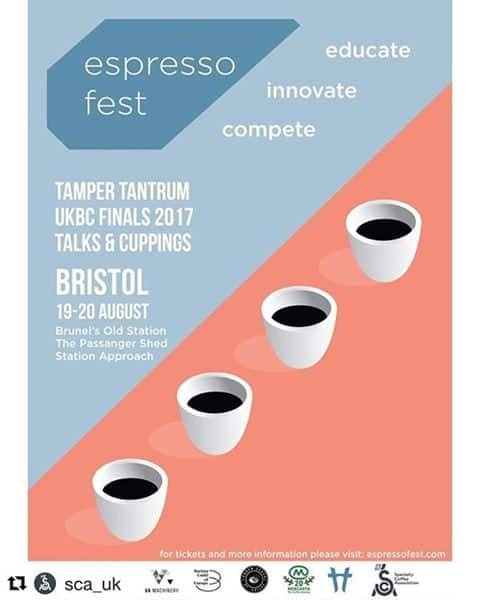 Sitting alongside two days of the UKBC competition will be a mini festival supported by our fantastic sponsors. Plus Sunday will see panel discussions and content provided by the world renown ‘Tamper Tantrum’, whilst both days will have a wide range of educational content curated by SCA UK board member Ben Townsend and supported by the London School of Coffee, Mercanta and the Barista Guild Of Europe.
Espressofest will be held at the Passenger Shed at Brunel's Historic Temple Meads Station, where the sixteen highest placed competitors from the UKBC heats will compete in the semi-finals on Saturday 19th Augusts. The six highest scoring will then battle it out on Sunday 20th August, where the winner will be crowned the United Kingdom Barista Champion 2017 and will go on to represent the UK in the World Barista Championships in November in Seoul, South Korea.
Tickets cost £6 each and cover both days; Saturday 19th August and the Sunday 20th August. All proceeds from the sale of the tickets will be donated to the charity of the 2017 UKBC Winner.*
Thank you to our fantastic sponsors:
La Spaziale
Nuova Simonelli
Puly Caff
Beyond the Bean
Bewleys
Northiam Dairy
Everpure
London School of Coffee
Pullman
SCA / BGE

* Subject to approval that the charity choice does not conflict with the overall aims of the SCA UK. The Specialty Coffee Association (SCA) is a membership-based association built on foundations of openness, inclusivity, and the power of shared knowledge.

Bristol's Caffeine Delivery; The City Is Doing Something Right!